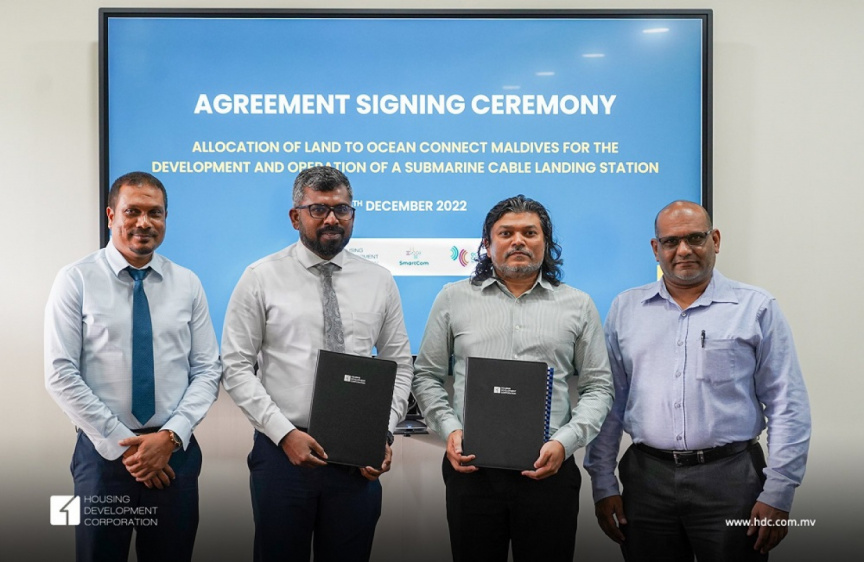 Housing Development Corporation (HDC) has Ocean Connect Maldives (OCM) sign agreement for land allocation from Hulhumale' for the development of the first submarine cable landing station in the Maldives on December 5, 2022. (Photo/HDC)

Housing Development Corporation (HDC) has allotted land from Hulhumale’ for Ocean Connect Maldives (OCM) for the development of the first submarine cable landing station in the Maldives.

Agreement was signed with Ocean Connect Maldives to allocate land for the development and operation of a Submarine Cable Landing Station.

This submarine cable is being established as part of efforts to decrease internet prices in the Maldives, and provided faster speeds of internet across the country. The project was contracted to Indian billionaire businessman Mukesh Ambani’s Reliance Jio Infocomm Limited (RJIL) back in February.

The cable connecting to Maldives is the Reliance company’s India-Asia-Xpress (IAX) that will connect Mumbai and Chennai to Singapore.

The company is also building another cable, India-Europe-Express (IEX), that would connect Mumbai to Europe.