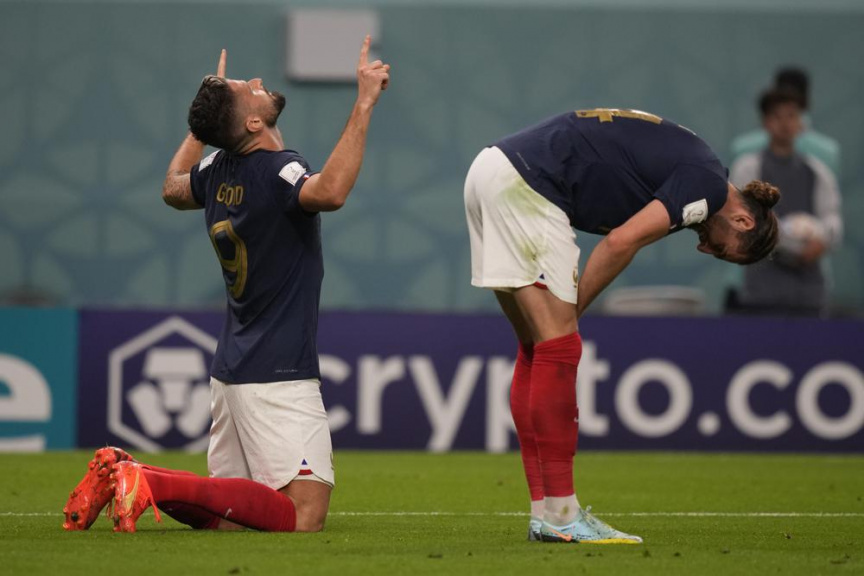 AL WAKRAH, Qatar (AP) — France showed it can cope without its star striker at the World Cup.

In Karim Benzema’s absence, Kylian Mbappe scored one and set up the second of Olivier Giroud’s two goals to help the defending champions beat Australia 4-1 Tuesday.

Giroud equaled Thierry Henry’s national record of 51 goals with a header from Mbappe’s cross in the 71st minute. Giroud, who failed to score at the last World Cup but did find the net at the 2014 tournament, can break Henry’s record when France faces Denmark on Saturday.

“It’s not just about chasing records but what he always does on the field,” France coach Didier Deschamps said. “He’s a very important player for us.”

Moments before that strike, Mbappe headed in Ousmane Dembele’s cross from the right to start this World Cup as he finished the last — with a goal. He knelt with one hand behind his back and his finger on his forehead in a new celebration.

Deschamps joked that Mbappe could now become even more lethal.

“He always dreams about scoring headers, so if he starts doing that he’ll be even more dangerous,” Deschamps said, cracking a smile. “I knew he would be ready tonight because this is his competition.”

Craig Goodwin gave Australia the lead when he turned in winger Mathew Leckie’s cross in the ninth minute.

France midfielder Adrien Rabiot equalized with a powerful header in the 27th and set up Giroud’s first goal shortly after.

“It’s great for our momentum and confidence to have turned things around,” Giroud said. “Even though we could have scored more we combined well.”

France was playing without the injured Benzema, who was ruled out of the World Cup last week.

The Socceroos were pumped up and the green-and-gold Aussie fans were loving it. They even mocked Mbappe with chants of “Who are ya? Who are ya?” after he lost the ball dribbling down the left.

That’s as good as it got for them.

Theo Hernandez curled in a cross for Rabiot to score his first World Cup goal — four years after refusing to go on France’s standby list in case of injuries. He even emailed France coach Didier Deschamps to be taken off the list and was dropped from the national team for two years.

“Having Adrien playing at this level is very important for us,” Deschamps said.

Injuries are hurting Deschamps’ team, however, and now the coach could be without Lucas Hernandez — Theo’s older brother. He hurt his knee in the build up to Australia’s goal.

“He needs to have tests but unfortunately it does look pretty serious,” Deschamps said. “That’s the real low point about tonight.”