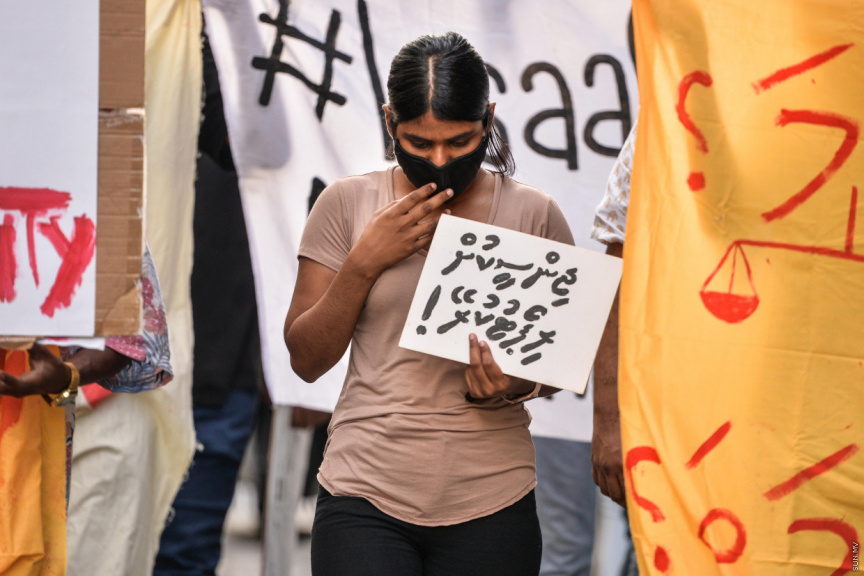 Protestors hold up a sign during an anti-rape rally in Male' City. (Sun Photo/Fayaz Moosa)

A female staff working in a private company has been allegedly suspended and threatened by the Human Resource Department (HR Department) for filing a complaint over sexual abuse.

The sister of the victim who spoke to Sun regarding the incident which took place at an office based at Crossroads Maldives last week said that her sister who joined the office during last September was sexually abused by the regional manager of the company’s office in the Maldives.

“When my sister was climbing down the stairs, he came and pushed her against the wall and forcefully tried to engage in sexual acts, and touched private parts,” the sister detailed.

The victim was suspended when the complaint was filed against the Maldivian man serving as the Head of Operations in the Maldives’ office of the international company widely involved in marine transportation to their HR Department. The sister also said that the victim was instructed by the HR Manager to not ‘interact’ with the alleged abuser through her husband.

Commenting regarding the matter, HR Manager of the office told Sun that the two parties involved were suspended when the complaint was submitted, further expressing the inability to make a comment regarding the allegations as the case is under further investigation.

The case was reported to the police on November 11, following which the authority is probing the case.

Teacher gets 15 years for sexual abuse of a student

Man arrested for sexual abuse of a minor in Addu City