Government: Not trying to dismiss Nasheed from Parliament 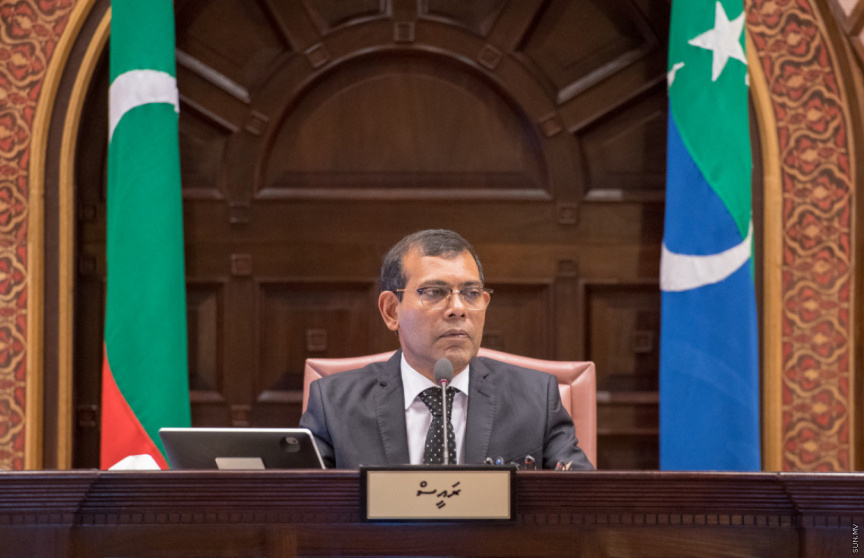 Speaker Nasheed has stated that the report can only be set on the agenda after three days since it was resent. (Photo/Parliament)

The government on Sunday stated that there were no efforts ongoing to remove former President Mohamed Nasheed as Speaker of the Parliament.

Some members who support Nasheed have claimed that the government was behind the constitutional case lodged at the Supreme Court seeking to dismiss him from the Parliament.

Addressing this, the Spokesperson for the President’s Office Miuvaan Mohamed said to Sun that the government was not attempting to remove Nasheed.

Miuvaan refrained from making any further remarks on the situation.

The case was submitted to the court by Ahmed Thalib on Wednesday, accusing the former Maldivian president of violating his oath of office by representing Sri Lanka at the COP27 Summit in Egypt.

He argued representing a foreign sovereign power on a state-paid salary and violating his oath of loyalty to Maldives is in violation of Article 72 of the Constitution.

This article states that MPs must act in the best interest of Maldives and the Maldivian people and must not abuse their position to promote the personal interests of themselves or others.

Thalib asked the court to declare Nasheed’s action unlawful and established that he lost the legitimacy of his position in the Parliament.

Members who stand with Nasheed such as MP Hassan Latheef and MP Imthiyaz Fahmy have been very vocal in their criticism of the government.

MP Hassan Latheef alleged that there was government backing in the work being done to dismiss Nasheed, and so the case submits to Supreme Court.

Meanwhile, MP Imthiyaz said that the government was harassing Nasheed. He also claimed that some of the MDP members have been using disrespectful words at Nasheed at the orders of the government.

Munawwar described Nasheed’s representation of a foreign state, given his position as the head of one of Maldives’ three powers of the state as “shameful”.

“Tell me a way one can become a greater traitor to the state of Maldives. The speaker of our Parliament went to represent another country. This is unbelievable,” he said.