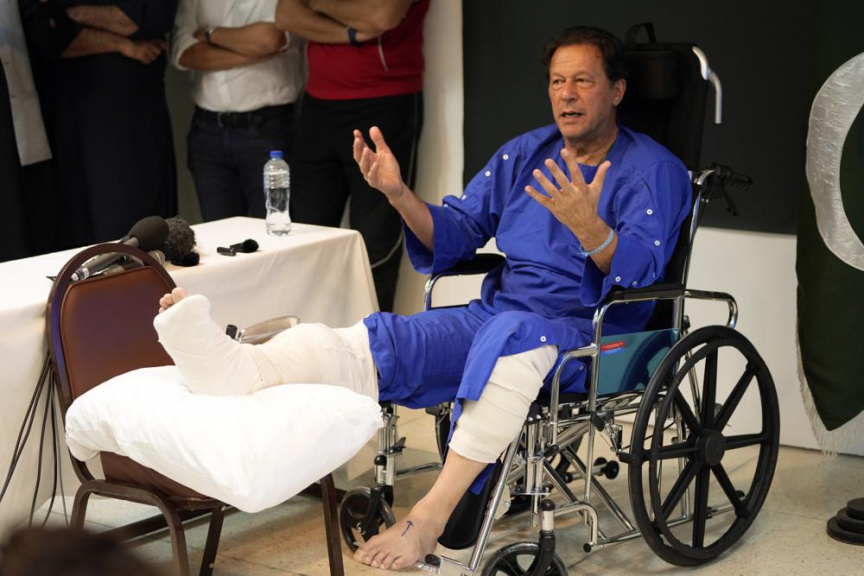 LAHORE, Pakistan (AP) — Former Pakistani prime minister Imran Khan said Sunday that a protest march toward the capital suspended after he was wounded by a gunshot in an apparent attempt on his life will resume Tuesday.

Sitting in a wheelchair, his right leg bandaged and elevated, Khan spoke from the Shaukat Khanum hospital, where he was admitted Thursday after he received bullet wounds in his right leg.

Khan repeated his demand for an investigation into the shooting and the resignation of three powerful personalities in the government and the military whom he alleges were involved in staging the attack on him.

Khan’s march on the capital was suspended in Wazirabad, a district in eastern Punjab province, after a gunman opened fire, wounding him and killing one of his supporters. Thirteen others were hurt. He said the march would pick up again from Wazirabad.

Khan was ousted from office in April in a no-confidence vote in parliament. He organized a march on Islamabad to pressure Prime Minister Shahbaz Sharif’s government to hold early elections but Sharif says elections will take place as scheduled, in 2023. Khan led an initial protest march in May but it ended when supporters clashed with police in the capital.

Khan’s protest march, which started Oct 28, was peaceful until Thursday’s attack. The shooting has raised concerns about growing political instability in Pakistan, which has a history of political violence and assassinations.

Khan said the march, to be resumed Tuesday, will take 10 to 15 days to reach Rawalpindi, where convoys from other parts of the country are expected to join the rally. He said he will keep in touch with the main march participants through a media link and will eventually lead the “sea of people’” toward Islamabad.

Khan offered no evidence for his allegations, which were rejected by Sharif’s government and the military spokesman said the allegations were not true.

Khan was discharged from the hospital later Sunday and moved to his ancestral home in Lahore.