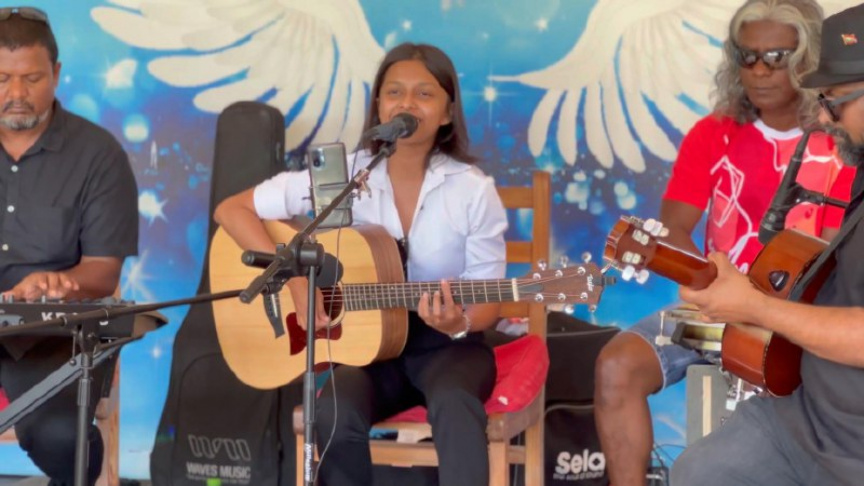 The Sri Lankan singing sensation Yohani Diloka de Silva has concluded her trip to Maldives – her very first to the island destination.

Yohani, who sang the viral hit ‘Manike Mage Hithe’, travelled to Maldives to perform in the Chanaacha 2022. She performed ‘Manike Mage Hithe’ and a Hindi song and a Singhalese song. The concert, held in Hulhumale’, attracted a large crowd.

After her performance at the Chanaacha, Yohani travelled to the Hideaway Beach Resort & Spa, where she enjoyed the sun and beach.

She also visited HA. Dhidhdhoo, where she posted a video of local girls dancing as she sings her hit song. She interacted with the locals and took selfies.

After concluding her visit to Hideaway, she travelled to Kuredu Island Resort at the invitation of Champa Mohamed Moosa (Uchu).

He presented Yohani with the traditional boduberu and hosted a music show.

She then travelled to Hurawalhi Island Resort, where she visited the underwater restaurant and held a special photo session.

Speaking to Sun before taking her first sea plane ride to the airport to travel back to Mumbai, Yohani said she would never forget the love and hospitality of the Maldivian people.

She also thanked the team from Baiskoafu who organized the Chanaacha 2022, and thanked Malla Ahmed Nasir, Uchu and Moosa Rasheed.

She also expressed delight at joining in Maldives’ celebrations for its golden jubilee year of tourism.

Yohani’s trip to Maldives was her first trip as a celebrity since she signed with an Indian talent management company. She currently resides in Mumbai, India.