ADK: Hospital being developed in Hulhumale’ Phase II to have highest quality of services 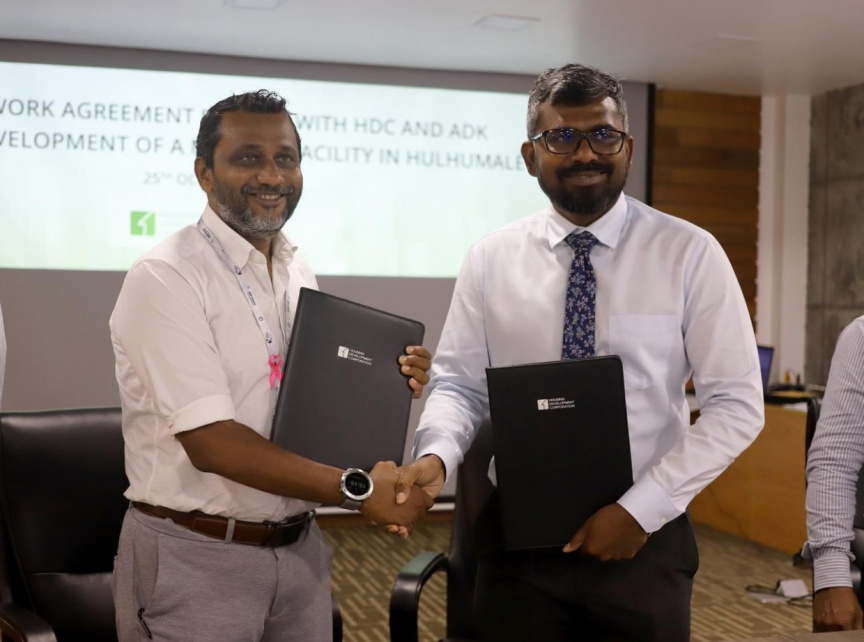 The contractor of the hospital being developed at Hulhumale’ Phase II, ADK Hospital Private Limited, has stated that the highest quality of medical services will be available at the hospital.

Housing Development Corporation (HDC) and ADK Hospital executed an agreement for the development of a hospital in Hulhumale’ Phase II on Tuesday.

Speaking regarding the agreement with Sun, ADK’s Managing Director Ahmed Afaal said that the agreement executed yesterday with HDC, was a framework agreement.

Afaal detailed that ADK had submitted an Expression of Interest (EOI) in response to an announcement made by HDC in January of this year, for the development of a medical facility providing healthcare services in Hulhumale’ Phase II.

“As HDC believed that the EOI submitted by ADK had been the best amongst the once received following their assessments, we were given the chance to sign the agreement to develop a hospital,” he added.

Noting that it was a framework agreement signed on Tuesday – Afaal stressed that the agreement does not pertain to the commencement of the construction of the hospital.

He explained that under the framework agreement, ADK will formulate concepts for the development of the hospital and work on coming to an agreement with HDC within the next six months.

“Only after reaching an agreement will we know whether the construction of the hospital can proceed. How long it will take to complete the project, and this sort of information,” he had said.

He said designing the hospital’s concept was contracted to Riyan Privat Limited by ADK on Tuesday evening.

Speaking further, Afaal said that ADK is non-stop working toward the development of the health sector. He described the project scored by the company yesterday as an opportunity to develop the Maldivian health sector, and improve the quality of healthcare services provided.

In this regard, he noted that the hospital to be developed at Hulhumale’ Phase II at its completion – would be a medical facility providing the highest quality of services. He added ADK has currently proposed to develop the hospital as a teaching hospital.

“We will make no compromises in this. All the work will be carried out at a higher standard than done in Male’ at present. It is a lot of work, when developing as a teaching facility,” he had said.

Afaal said that there is no hospital nor a medical facility developed as a teaching facility in the Maldives as of yet.

Therewith, he said the hospital being developed at Hulhumale’ Phase II will ease access to quality healthcare services for Hulhumale’ residents and others amongst other benefits.

Foreigner who fell into sea on buggy passes away