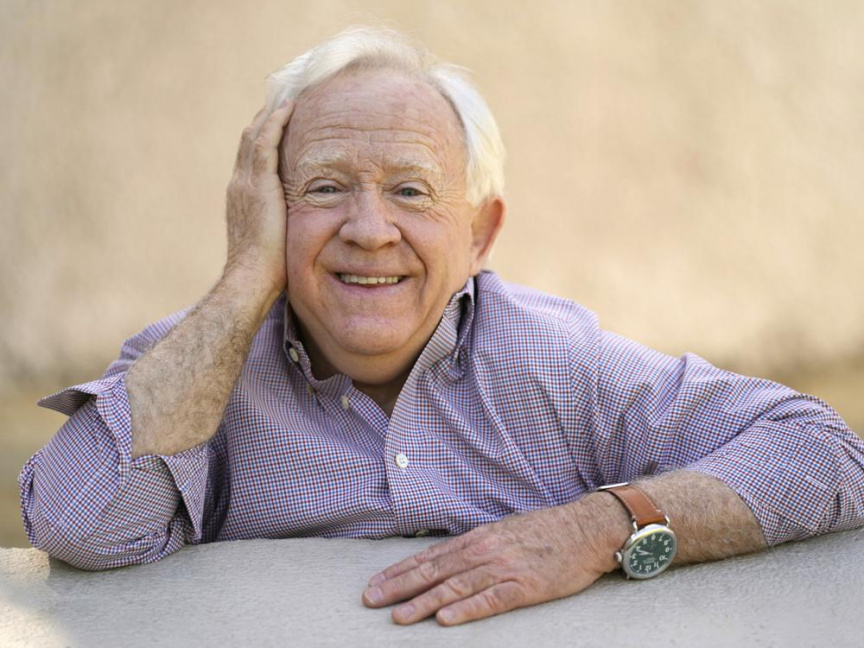 Leslie Jordan poses for a portrait at Pan Pacific Park in the Fairfax district of Los Angeles on Thursday, April 8, 2021 to promote his new book "How Y'all Doing?: Misadventures and Mischief from a Life Well Lived." (AP Photo/Damian Dovarganes, File)

LOS ANGELES (AP) — Leslie Jordan, the actor whose wry Southern drawl and versatility made him a comedy and drama standout on TV series including “Will & Grace” and “American Horror Story,” has died. The Emmy-winner, whose videos turned him into a social media star during the pandemic, was 67.

“The world is definitely a much darker place today without the love and light of Leslie Jordan. Not only was he a mega talent and joy to work with, but he provided an emotional sanctuary to the nation at one of its most difficult times,” a representative for Jordan said in a statement Monday.

The native of Chattanooga, Tennessee, who won an outstanding guest actor Emmy in 2005 for his part as Beverly Leslie in “Will & Grace,” had a recurring role on the Mayim Bialik comedy “Call Me Kat” and starred on the sitcom “The Cool Kids.”

Production on Fox’s “Call Me Kat” was suspended following Jordan’s death. He had completed work on nine episodes.

He died Monday in a single car crash in the Hollywood area, according to reports by celebrity website TMZ and the Los Angeles Times, citing unidentified law enforcement sources.

Stars of “Will & Grace” mourned his loss.

“My heart is broken,” Sean Hayes tweeted. “Everyone who ever met him, loved him. There will never be anyone like him. A unique talent with an enormous, caring heart. You will be missed, my dear friend.”

“Crushed to learn about the loss of @thelesliejordan, the funniest & flirtiest southern gent I’ve ever known,” tweeted Eric McCormack. “The joy and laughter he brought to every one of his #WillandGrace episodes was palpable.”

Jordan earned an unexpected new following in 2021 when the longtime Los Angeles resident area spent time during the pandemic lockdown near family in his hometown. He broke the sameness by posting daily videos of himself on Instagram.

Many of Jordan’s videos included him asking “How ya’ll doin?” and some included stories about Hollywood or his childhood growing up with identical twin sisters and their “mama,” as he called her. Other times he did silly bits like complete an indoor obstacle course.

“Someone called from California and said, ’Oh, honey, you’ve gone viral.’ And I said, ’No, no, I don’t have COVID. I’m just in Tennessee,” said Jordan. Celebrities including Michelle Pfeiffer, Jessica Alba and Anderson Cooper, along with brands such as Reebok and Lululemon, would post comments.

Soon he became fixated with the number of views and followers he had, because there wasn’t much else going on. By the time of his death, he amassed 5.8 million followers on Instagram and another 2.3 million on TikTok.

“For a while there, it was like obsessive. And I thought, ’This is ridiculous. Stop, stop, stop.′ You know, it almost became, ’If it doesn’t happen on Instagram, it didn’t happen.’ And I thought, ‘You’re 65, first of all. You’re not some teenage girl.’”

It was Jordan’s second book, following his 2008 memoir, “My Trip Down the Pink Carpet,” a personal take on Hollywood, fame, addiction, and learning to love oneself.

“That sort of dealt with all the angst and growing up gay in the Baptist Church and la, la, la, la, la. And this one, I just wanted to tell stories,” he told The Associated Press in 2021. Among the anecdotes: working with Lady Gaga on “American Horror Story”; how meeting Carrie Fisher led to Debbie Reynolds calling his mother and the Shetland pony he got as a child named Midnight.

He turned many of his memories and observations of life into stage productions, including off-Broadway runs of his musicalized memoir “Hysterical Blindness” and a 2010 version of his “My Trip Down the Pink Carpet,” a show that alternated between stand-up comedy and spirited one-man show.

Those celebrities in mourning included Jackée Harry, Marlee Matlin and Kristen Johnston, who called Jordan “magical.” Lynda Carter wrote he “put a smile on the faces of so many, especially with his pandemic videos. What a feat to keep us all laughing and connected in such difficult times.”

In 2007, Jordan discussed how a role as an Alcoholics Anonymous sponsor in the CW teen drama “Hidden Palms” reflected his life and included a valuable lesson.

“If there is anything that kids could walk away with it is that people who use drugs and alcohol are masking something,” Jordan told the AP. “With me, it was my homosexuality. It was just easier to be gay when I was high. So I stayed high for 33 years. ... I don’t know when it went from recreational to medicinal, but that’s the line you cross where I needed a drink to get to a party, to be funny, to be me.”

The actor changed course after a drunk-driving incident in December of 1997.

“I stayed sober, didn’t take an aspirin. Nothing. And I worked my (expletive) off, and my career began to blossom.”

Jordan first arrived in Los Angeles in 1982 on a Trailways bus “with a dream and $1,200 pinned in my undershorts,” hoping to make it as an actor. He was told his 4-foot-11 stature and accent would hold him back, but proved the naysaysers wrong.

His big break came playing the role of a hapless ex-con in a 1989 episode of “Murphy Brown.”

“When that episode aired, my agent called the next day and said, ‘I’ve never seen anything like this. The phone is ringing off the hook.’”