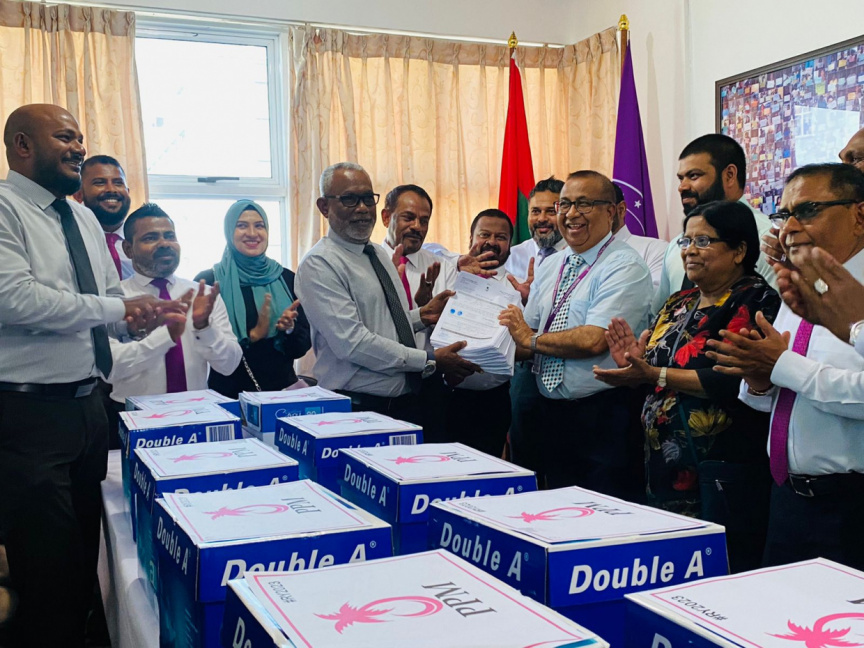 PPM hands over 10,000 forms of new members who signed for the party within a months' period to Elections Commission on October 5, 2022. (Photo/Ahmed Shiyam's Twitter)

Opposition Progressive Party of Maldives (PPM), on Wednesday, has submitted the membership application forms of 10,000 people who signed for the party within a period of one month to the Elections Commission (EC).

The forms were handed over to EC’s President Fuad Thaufeeq by PPM’s coalition partner, People’s National Congress’ President Abdul Raheem Abdulla alongside some members of the leadership of both parties.

PPM’s Spokesperson Heena Waleed told Sun on Wednesday the forms belonged to 10,000 people who newly joined the party. She detailed the sudden influx in members to upcoming internal elections.

“Those contesting for different posts in the internal elections have to submit a certain number of forms. Therewith, the party has received many forms,” she had said.

The election is scheduled for November 5.

Heena said that there were still approximately 2,000 additional forms that needed to be submitted to EC, which shall soon be done.

Statistics by EC show that PPM had 33,244 members as of this July, making it the political party with the second highest number of members. Coming in first is ruling Maldivian Democratic Party (MDP) with 58,840 members.