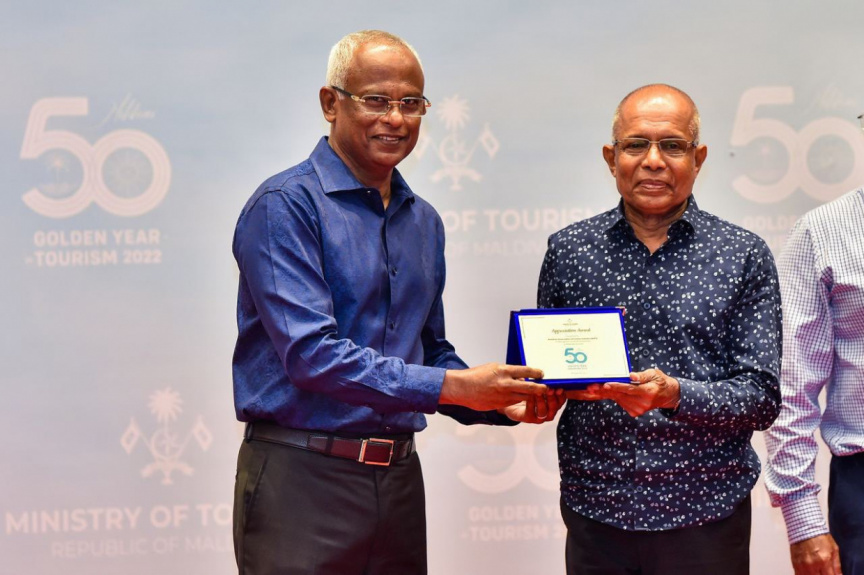 Contributors to Maldives’ tourism sector were honored with appreciation plaques during a special ‘Tourism Appreciation Reception’ held on Thursday, as part of the events marking the 50th anniversary of the nation’s tourism sector.

Held at Crossroads Maldives on Thursday night, the event brought together contributors of the tourism sector, both old and new. The event was graced by President Ibrahim Mohamed Solih, Vice President Faisal Naseem, pioneers of Maldivian tourism and other state dignitaries.

Appreciation plaques were presented to both local and foreign prominent individuals, companies, and organizations that have contributed to the Maldivian tourism sector over the past 50 years – including the pioneers of Maldivian tourism.

The event also served as a setting where tourism sector servicers could network.

Recognition served to tourism sector contributors at the event was well received by the whole industry.

One of the pioneers of Maldivian tourism, Mohamed Umar Manik said that the current administration recognized and honored the hard work of tourism sector workers more than any other administration.

“Tonight, we have learned that this is an industry we should be proud of. That the government has recognized this as well,” he added.

‘Tourism Appreciation Reception’ is just one of the events being held in celebration of the 50th anniversary of tourism in the Maldives. Multiple events have been planned for this week, and next week as part of the celebrations.

Media team from Nordic region in Maldives for fam trip