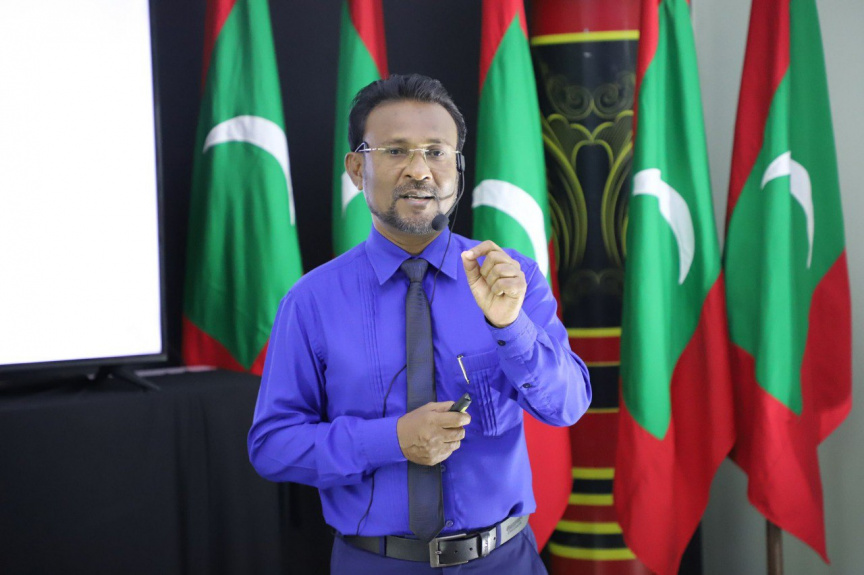 Over 4,000 students from more than 100 schools took part in the information session held online by the academy.

Speaking at the session, the President of Dhivehi Language Academy Dr Ashraf Abdul Raheem said that Maldivians have the choice and power to identify themselves as Maldivians because of the Dhivehi language.

He also noted that this language sets Maldivians apart from everyone else in the world.

“… in separating people of different nations, the biggest identifier for us was given by Dhivehi language.”

Highlighting that 99.9 percent of the education system is based on the English language, Dr Ashraf said that students’ relationships with books and other ways are linked to that language. He further said that due to this, students are foreign to the ways of a Dhivehi environment.

“Students only know Biology books, Chemistry books, Physics books, Mathematics books, and from the other books also the English information in it.”

Moreover, he noted that even Fisheries Science is taught in the English language, leading to many of the rich Dhivehi terms for various types of fishing and equipment used being replaced with English terms and ultimately getting lost with lack of usage.

Also speaking at the information session, Uz Mohamed Firuzul Abdulla Khaleel said that the biggest issue faced by Maldivians was a lack of responsible youth in the society that feels hopeful toward the nation.

Stating that every individual thinks about their future from a very young age, but questioned if anyone deliberated how to serve society.

Firuzul added that this was a matter today's youth need to do some deep thinking on.

“We need to dream about leaving society in a better situation than how it was when we came into it.”

Additionally, he said that this does not mean everyone will be in an influential position. But rather, everyone needs to aim to change the state of society and work towards it.

MDA leader: Unite to uphold the tenets of nationalism