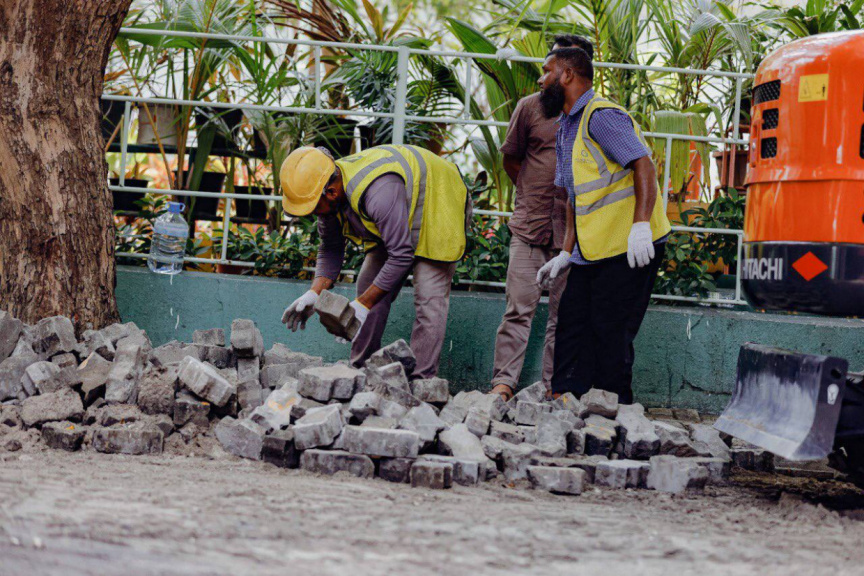 From the ongoing work in Ameenee Magu. (Photo / RDC)

Speaker of Parliament and former President Mohamed Nasheed has expressed concerns over the removal of trees from Ameenee Magu during the ongoing redevelopment of the road under the Male' Streetscaping Project.

Speaking during Monday's Parliament session, Nasheed said that the government as well as Road Development Corporation (RDC) need to work on finding an alternative to this.

He went on to say that if that is done, the next option would be to take the issue to court.

"If not, there is really no other option other than going to court as an individual citizen."

RDC has previously stated that the redevelopment of the road with asphalt cannot go on unless the larger trees are removed.

The pipes and cables buried underground are already affected by the roots of the trees, said the corporation.

Furthermore, the company had revealed that the uprooted trees are to be relocated to Kudagiri - developed as a picnic island in the Male' area.

Prior to commencing work, RDC had said that they will be working on the project in an environmentally friendly manner, without harming any trees.

There has been much criticism and public outcry over the issue.

Speaking with Sun addressing some of these concerns, the Managing Director of RDC Moosa Ali Manik said that cutting down the trees was not something the company wanted at all.

"We do not want to do it this way at all. The trees are taken as there is no other option. But when the road is finished, it will be alright. More trees than those taken will be planted. The road will be very green."

Ameenee Magu is one of the roads in Male’ with the most trees, some of the trees over 20 years old.

The project to redevelop Ameenee Magu was handed over to RDC in July, to be completed within 210 days. It is valued at MVR 84 million.

'Over MVR 970M invested in projects in HDh. Atoll'