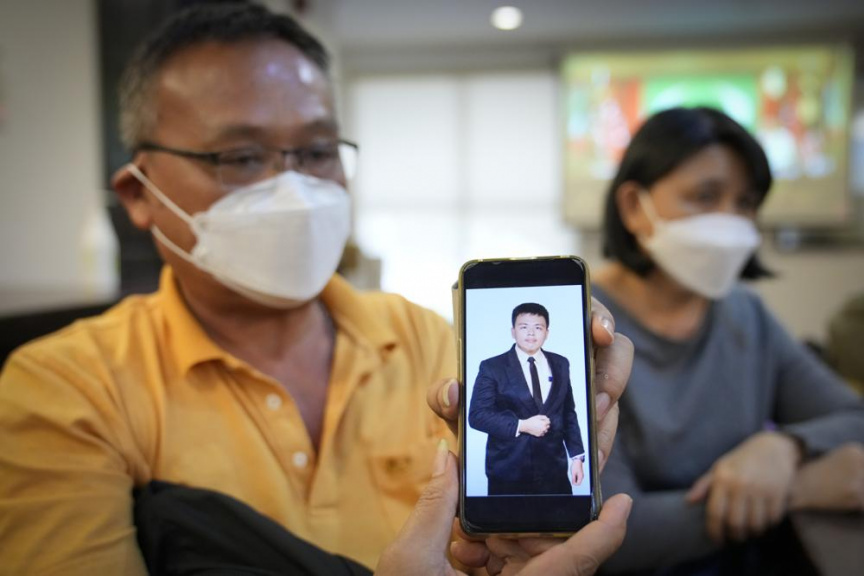 KUALA LUMPUR, Malaysia (AP) — The parents of a Malaysian man who died after falling prey to a human trafficking scheme appealed Wednesday to the government to rescue other scam victims trapped in Myanmar and Cambodia, saying they hoped there would be no more fatalities.

Malaysia’s government has pledged to rescue Malaysians caught in what is said to be “modern slavery” in the region, including in Laos, Thailand, Myanmar and Cambodia. The victims are often young people in search of employment or romance, like Goi Zhen Feng. The 23-year-old went to Bangkok in January to meet a woman he had only contacted online who he described as his girlfriend, his father Goi Chee Kong said.

Zhen Feng, who planned to graduate as a teacher this year, failed to return for his mom’s birthday in February. He made his first — and last — call to his parents in March to say he’d been beaten up for allegedly faking sick and needed 80,000 ringgit (about $17,500) so he could be hospitalized for an illness, the senior Goi said.

Following a tip-off by another Malaysian victim who had returned to the country, Goi said he believed Zhen Feng was taken to KK Garden in Myanmar’s Myawaddy township near the Thai border to work for companies engaged in online scams. Malaysian officials said KK Garden is a casino and entertainment complex in the Myawaddy village of Shwe Kokko that involves Chinese investment and is suspected of being a hub for organized crimes.

The family discovered Zhen Feng died in May under a fake name in a Thai hospital in Mae Sot, across the river from the Myanmar complex. He was hospitalized in intensive care for a month and his cause of death was reported to be infection in his heart and lungs, Goi said.

“We are slowly accepting the reality that my son is dead,” Goi told a news conference organized by the opposition Justice Party. “We hope the government will rescue all the victims in Myanmar and Cambodia.”

The foreign ministry says 148 out of 158 reported victims of job scams in Cambodia alone have been rescued, and it’s trying to track down victims in other countries: 12 in Thailand, 28 in Laos and 54 in Myanmar.

Over 30 Malaysian families rallied this week outside the prime minister’s office, calling for government intervention as more cases surface. The youngest reported victim to be rescued was 14.

Sim Chon Siang, a Justice Party lawmaker, has helped more than 50 scam victims. He said Shwe Kokko was like a maze with 20 blocks of buildings, based on victim and source accounts. He said each block has 52 rooms, with up to eight people crammed in one room.

Victims included people from Africa and other Asian nations who were lured to the guarded complex and immediately be given new names, Sim said. Generally they made to work long hours in a confined area scamming others, with some beaten up if they failed to show results, he said.

Some made it back home after their families paid ransoms, but many are afraid to share their experience for fear over their safety, Sim added.

Two Malaysians at the press conference Wednesday shared their stories of being tricked to work in Shwe Kokko.

A 30-year-old man, who declined to be named for fear of retaliation, said he was hoodwinked by a Malaysian he befriended on WeChat, a Chinese messaging app. He was offered 50,000 Thai baht (about $1,300) a month for an easy job and flew to Bangkok in mid-July.

He said he was taken to Mae Sot and crossed the river into Myanmar where armed men in military outfits escorted him to the complex. He said he saw some 200 Malaysians in the complex during his stay there, where he was made to work 15 hours daily recruiting people for the operations. After his family paid a 40,000 ringgit ($8,760) ransom, he was let off with a warning: “Don’t look for trouble.”

His experience was echoed by a 29-year-old single mother who was desperate after losing her job due to the COVID-19 pandemic. She said a Malaysia agent took her to Thailand, then to Mae Sot and KK Garden. She escaped more than three months later after pleading for her life and paying a ransom.

“I hope my son is the first and last (Malaysian) to die due to such scams,” Goi said.