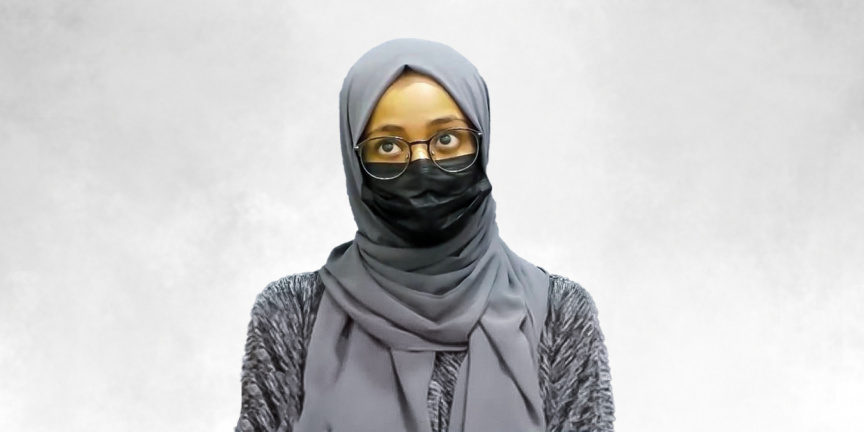 Haleemath Lamha Abdul Rahman attends a hearing at the Criminal Court on April 28, 2022. Lamha is charged as an accomplice in the murder of IGMH nurse Mary Grace Oned Pineda.

Criminal Court, on Thursday, ordered the prosecution to handover of the medical charts of IGMH nurse Mary Grace Oned Pineda, that detail how she was treated from the moment she was brought to the hospital to one of the suspects charged in connection with Mary’s death, Haleemath Lamha.

A hearing held in the case today consisted of debate on pretrial motions submitted by both prosecution and the defense.

One pretrial motion by the defense, on behalf of Lamha, was a request to hand over Mary’s medical charts.

The prosecution stated that Mary’s death summary would detail how she was treated after being brought to IGMH. However, presiding judge over the case, Hussain Faiz Rashad, said that the prosecution failed to specify that the requested medical charts did not exist.

“In this situation, if the defense has requested a document under the impression that it will aid in their defense, (the prosecution) must check whether the document exists, and if it does, must be provided to the defense,” he had said.

Citing these reasons, Judge Faiz had ordered the prosecution to submit the medical charts, if IGMH documented them, to the Court within the next seven days.

Exclusion of two witnesses submitted by the defense

Dr. Shaan was excluded as a witness as documents do not indicate he had treated Mary at any point.

Background of the case

Her husband, Marvin S. Y. Vargas, 30, was charged with murder with intent in connection to her death.

Lamha, who was having an affair with Marvin, was charged as an accomplice to the murder.

Their trials are being held separately.

Should the murder charge against Marvin be proven in court, he faces a 10-year jail sentence.

Lamha faces a minimum of 6 years in prison if convicted as an accomplice to the murder.

Lamha is also charged with two additional crimes; knowingly taking unauthorized control over the property of another after the police found two injections from IGMH which she had not been authorized to take out of the hospital hidden in an envelope in her bedroom and carrying out an activity that requires permission from an authority, without obtaining permission from the relevant authority after police found a type of drug issued only for the use of hospitals and health facilities during a search of her bedroom.

She faces 4 months and 24 days in prison if convicted of both these charges.

Lamha admitted to her affair with Marvin in an interview to Sun last year. She claimed they ended their relationship a day before Mary’s death, but got back together again.