Storm moves up east China coast after blowing over Shanghai 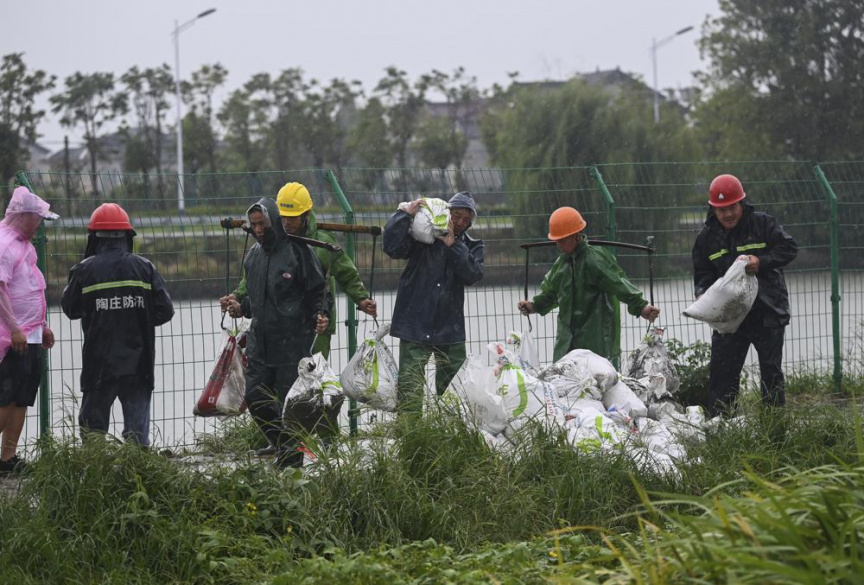 In this photo released by Xinhua News Agency, workers carry sandbags to reinforce a riverbank to prevent the river back flow caused by the approaching typhoon Muifa in Jiashan County of Jiaxing City, east China's Zhejiang Province, Wednesday, Sept. 14, 2022. Typhoon Meihua has weakened to a severe tropical storm Thursday morning, after bringing heavy rains and strong winds to Shanghai and parts of Jiangsu province overnight, according to China's National Meteorological Center. (Xu Yu/Xinhua via AP)

Typhoon Muifa had maximum winds of 125 kilometres (77 miles) per hour upon landfall late Wednesday but had weakened to a tropical storm by morning, according to China’s National Meteorological Center. It was forecast to weaken further as it moved through eastern parts of Jiangsu province throughout the day.

No casualties or major damage has been reported in the Shanghai area, and the city was restarting public transit Thursday after shutting down the metro as the storm passed.

Photos posted on social media showed flooding in the city of Ningbo, south of Shanghai, with scooters and cars buried in water, after massive rains overnight. However, official city government accounts only noted certain street closures.

One residential complex in Shanghai said it measured 15 centimetres (6 inches) of water overnight, according to local media.

Jiangsu province issued a typhoon warning as well as a warning for heavy rain, and districts across the province have cancelled school for Thursday.

Maximum winds this morning reached 108 kilometres (67 miles) per hour and will gradually weaken through the day, the National Meteorological Center said. The storm will leave land briefly and reach the Yellow Sea before it hits Shandong province later Thursday night, moving around 25 kilometres per hour, the centre said.

More than 1 million people in Shanghai and other cities in Zhejiang Province had been evacuated on Wednesday, according to state media.

Chinese spaceship with 3 aboard dock with space station

Woman arrested in S.Korea after bodies found in NZ