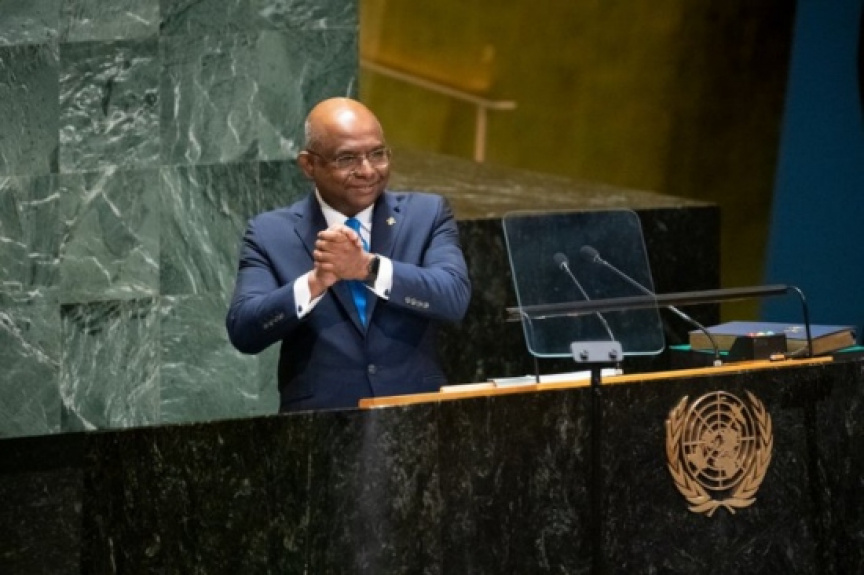 Minister of Foreign Affairs Abdulla Shahid described United Nations General Assembly (UNGA) Presidency as a win like no other for Maldives and the Maldives Foreign Service.

During the address, he credited the foreign policy of President Ibrahim Mohamed Solih for the opportunity to lead the UN.

“The fact that a Maldivian national presided over the 76th session of this universal body of the United Nations, is the result of the robust foreign policy of President Ibrahim Mohamed Solih. Proof that Maldivians have earned the respect and trust of the international community.”

Shahid expressed gratitude towards all that assisted him during his term and supported his endeavours and especially thanked President Solih.

“I thank President Ibrahim Mohamed Solih, for trusting me with this responsibility. This is a win for your forward-looking foreign policy, and your commitment to multilateralism.”

He went on to praise the hard work of the team at the Foreign Ministry, and said that they have shown the world “… what a small team of highly determined and committed individuals – who refuse to give up hope – can achieve.”

“I have one word for Team Khaarijee – Kurevijje (we’ve done it).”

In addition to this, Shahid talked about working during the Covid-19 pandemic and overcoming the challenges that came with it.

“Despite the pandemic forcing us to work in a hybrid fashion, I am incredibly proud that we finished the work of the regular part of the session on time, including adopting the budget. This would not have been possible without the steadfast leadership, and commitment of the committee chairs and their respective bureaus”

He led his term as UNGA President under the theme “Presidency of Hope”, built on Five Rays of Hope.

“And every day, for the past 365 days, my team and I worked to deliver on this vision.”

Moreover, he spoke about the various achievements during the 76th session.

Some of the victories highlighted by Shahid in the speech:

-        Discussions on sustainable recovery of the Tourism sector – the first time that tourism was ever discussed at a high-level meeting of the General Assembly.

-        Convened the first Commemoration of the International Day for Countering Hate Speech.

-        Holding an emergency special session of the General Assembly – the first time in 40 years, on the request of the Security Council, to address the conflict in Ukraine

-        Gender-equality agenda being mainstreamed in all discussions

In concluding his speech, Shahid said that though the 76th session has concluded, hope must live on.

“Today, the 76th session of the General Assembly ends. But hope must live on.”

He also congratulated the 77th UNGA President-elect Csaba Korosi and wished him and his team the best.

Shahid was elected as UNGA President on September 14, 2021. He secured the position by contesting against the Foreign Minister of Afghanistan Zalmai Rassoul. Shahid garnered 143 to, Rossoul’s 48.

This marked the first time a Maldivian was elected to such a high position in an international body.