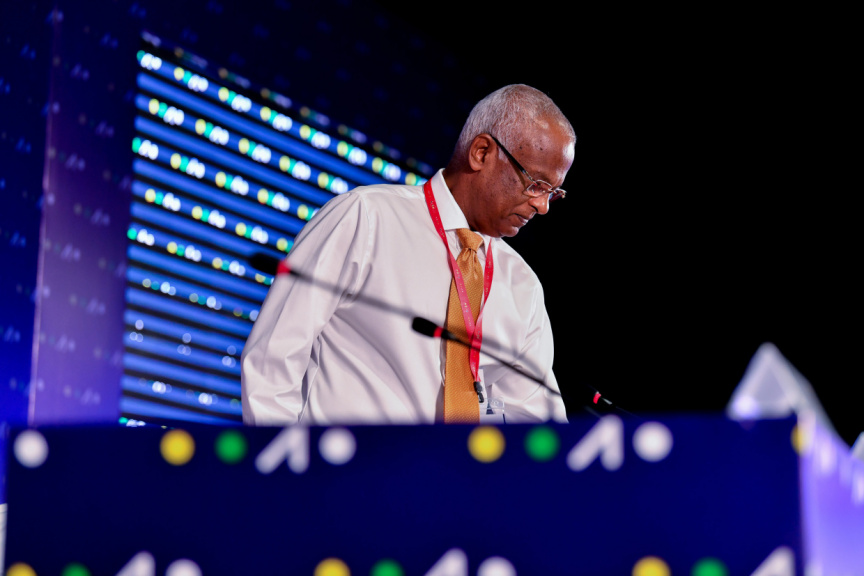 President Ibrahim Mohamed Solih on Monday stated that councils need to be more self-reliant in order to improve their performance.

While speaking to commence the third session of the third edition of the Viavathi Raajje conference in L. Gan held for the southernmost atolls.

The first session for the day focused on the fiscal autonomy of local councils, during which President Solih emphasised the importance of island councils finding their own source of income in order to become more self-reliant.

He said that the purpose of the session was to engage island council members and the Women’s Development Committee (WDC) representatives in discussions to enable economic empowerment for the local residents. He went on to add that one of the main objectives of the Decentralisation Act was to provide island councils with complete fiscal autonomy.

As per President Solih, the budget allotted to the councils from the state budget grows at an exponential rate each year, but there is still room for improvement, and ways to increase the efficiency and self-sufficiency of the councils and WDCs.

Moreover, he highlighted that the administration allocates five percent of its total revenue and 40 percent of the total income generated from leasing islands and lagoons in atolls, to the island councils.

The councils also have the authority to form companies and operate businesses in order to generate more income.

Noting that fiscal autonomy was a major topic of discussion during the previous Viavathe Raajje conference held in Ukulhas, Alifu Alifu Atoll earlier this year, the President expressed hope that constructive solutions would be sought by the conference's conclusion.

As part of the session, Minister of Finance and Treasury Ibrahim Ameer and Minister of Economic Development Fayyaz Ismail provided participants with updates on the government's efforts to give councils fiscal autonomy.

The Finance Minister, Economic Minister, and Ministers at the President’s Office Ali Shiyam, Ali Niyaz, MP for Hulhumale’ and Chair of Parliamentary Committee on Decentralization and Chief Executive Officer of the Local Government Authority (LGA), Fathimath Afshan Latheef took part in the panel alongside President Solih.

Over 270 individuals are participating in the Viavathi Raajje conference, along with 107 council members and Women’s Development Committee (WDC) representatives. The final session of the conference will focus on building resilient communities.