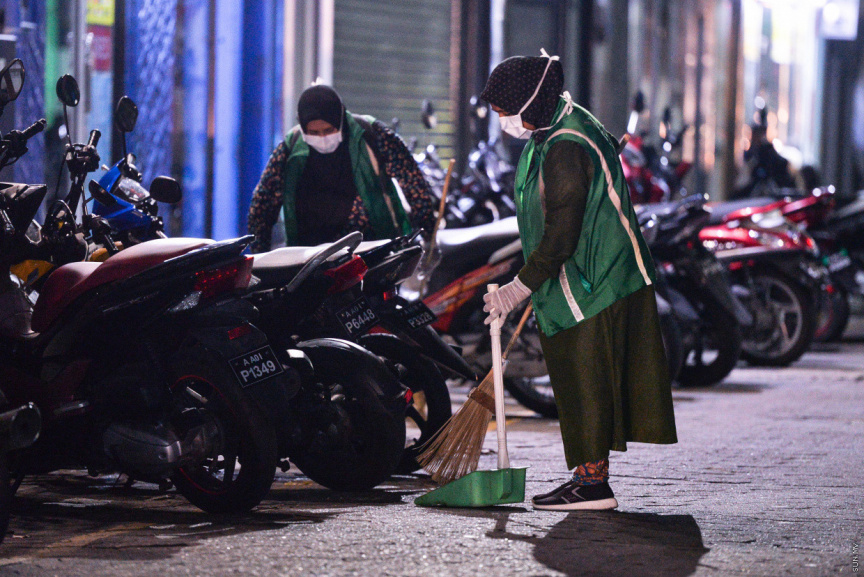 The Male’ City Council’s decision not to renew the agreement made with Waste Management Corporation Ltd (WAMCO) to clean roads and other public areas has threatened the employment of 178 local road sweepers.

The City Council made the decision after discussions and concluded that the council can do it at a rate cheaper than paying MVR 2.5 million to WAMCO annually.

WAMCO has employed largely locals to sweep the roads of Male’ and Vilimale’.

While 150 people work on the roads of Male’, 28 work in Vilimale’. Of this, with the exception of five, all are local women.

Even from this, WAMCO had prioritized hiring single mothers and unemployed women.

The street sweepers are paid MVR 8,000, along with all the other befits provided for permanent employees of WAMCO.

The cleaning begins at 21:00 and goes on late into the night. This time is allocated in order to provide these women with the opportunity to attend to other home-related tasks during the day.

Speaking with Sun, the Senior Public Relations Officer at WAMCO Ahmed Azim said that the City Council’s decision posed a threat to the employment of these women.

He went on to detail that they are hired to work at a time that’s convenient to them, and should that opportunity be lost, it would be difficult to fit those employees into other areas.

“The household waste collection operation would be difficult for them isn’t it? Since they are hired to work at night to make it convenient.”

In a statement released by WAMCO on Saturday, the company noted that while most of its employees are local, the City Council has more expatriates working with them.

In a responding statement, the City Council noted that while the council spends large amounts on cleaning public spaces, those areas are not well maintained.

“Complaints are received by the city council regarding trash that’s uncollected on the roads for long periods of time and in the way of pedestrians and vehicles. It has been noticed that this happens as the work is not done well.”

Additionally, City Council noted that even at the moment they are in charge of cleaning and mainlining 12 areas in Male’, and added that shifting this work under their jurisdiction would be more convenient for people.

WAMCO was tasked with sweeping and cleaning the roads of Male’ City in December of 2019.