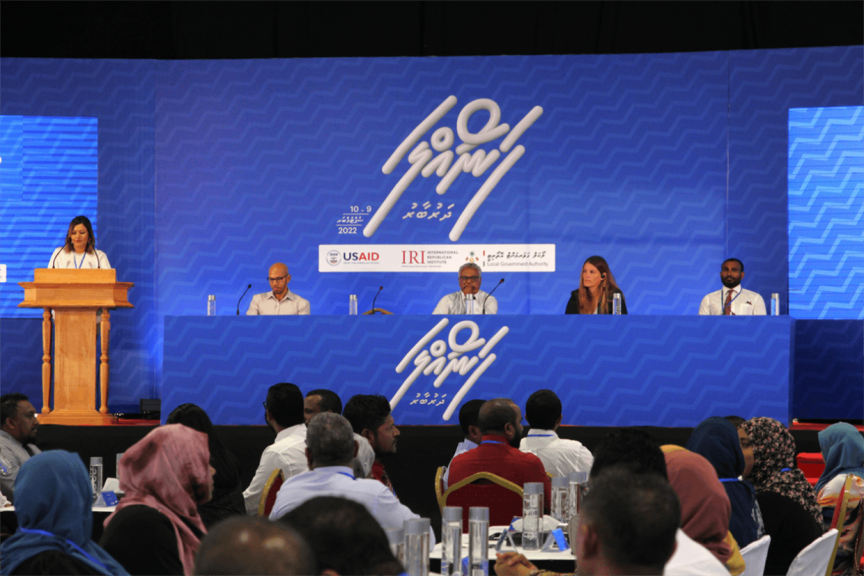 The fourth edition of ‘Fanoala Dharaubaaru’, a forum aimed at identifying and discussing issues within the local governance system, organized by the Local Government Authority (LGA), International Republican Institute and USAID has commenced at L. Gan on Friday.

This edition of the forum is participated by local councils from the southern atolls of Maldives, Dhaalu Thaa, Laamu Gaafu Alifu, Gaafu Dhaalu atolls, Fuvahmulah City and Addu City. The inauguration ceremony of the forum was officiated by the Chairperson of Parliament’s Committee on Decentralization, Hulhumale’ MP Ali Niyaz.

Speaking at the ceremony, MP Niyaz said that the newest amendment being discussed for the Decentralization Act is regarding the by-election of Women’s Development Committees (WDC).

Niyaz is referring to the bill proposing amendments to the Decentralization Act submitted by Addu Meedhoo MP Rozaina Adam. The bill which was sent to the Decentralization Committee on August 31 stipulates that WDC’s by-election will be held once a year, whereas under circumstances quorum is lost, the by-election would be held within two months’ time.

LGA’s CEO Afshan Latheef who also spoke at the inaugural ceremony of the forum said that ‘Fanoala Dharubaaru’ is one which produces results. On this note, she detailed that matters that were deliberated during the previous edition of the forum have been discussed with the relevant authorities, in an effort to perfect the local governance system.

“As proposed in the previous ‘Dharubaaru’ held in Ukulhas last May, efforts to revise the fiscal formula used to lay down councils’ budgets have commenced. I am also aware that in this fourth forum, Finance Ministry will present their proposals to your discussions,” she had said.

Afshan also noted that in the forum held at Ukulhas – difficulties with respect to formulating the land use plans of islands were discussed. In light of this, she said LGA, in collaboration with Planning Ministry, conducted a training program regarding it last May, whereas similar programs are in the pipeline.

She further stated that Planning Ministry was working on solutions to difficulties faced in formulating and passing the land use plans.

It was also underscored by Afshan that LGA had conducted 78 training programs during the past year, of which most were carried out online.

“By will of god, LGA will commence trips starting October to conduct physical trainings. Trainings will be focused in the future on topics highlighted by councils to require trainings on during previous forums,” she added.

Afshan said that LGA’s goal is to commence training on financial matters next month – and expand the program across the country by the end of the year.

LGA said that ‘Fanoala Dharaubaaru’ forum’s main goal is to discuss obstructions to implementing the government’s five-year strategic plan and the Decentralization Act.

Matters discussed in the forum will be presented to President Ibrahim Mohamed Solih and other government stakeholders during the third edition of ‘Viavathi Raajje’ conference scheduled to kick off at L. Gan on Saturday.

President Solih will be departing to Gan on Saturday, to partake in the conference.