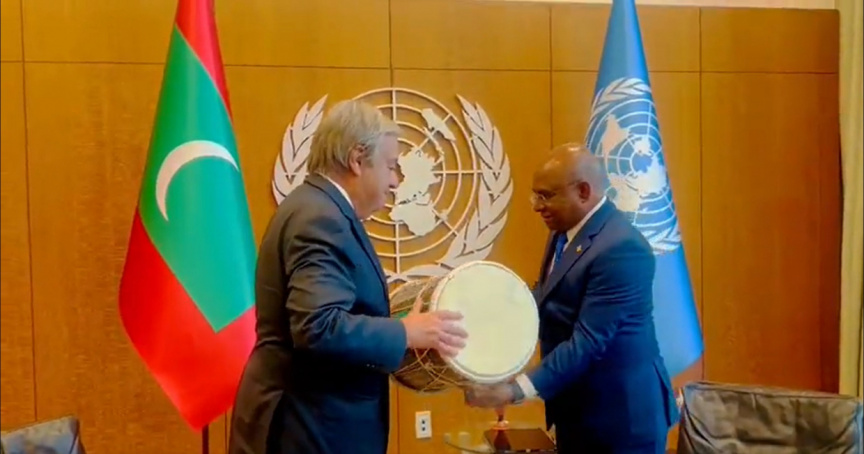 Maldivian Foreign Minister Abdulla Shahid’s term as the President of the 76th session of the United Nations General Assembly (UNGA) is set to expire in one week.

Shahid was elected President of the UNGA on September 14, 2021 – becoming the first Maldivian to hold the post. His one-year term is set to expire on Wednesday, September 14.

He had his last monthly coordination meeting with the UN Secretary-General Antonio Guterres on Wednesday. A dinner was held in Shahid’s honor at the UN headquarters in New York. At the dinner, Shahid presented Guterres with a Maldivian Boduberu as a farewell gift.

Today, I had my last monthly coordination meeting with Secretary General @antonioguterres.

Thanked him for his friendship & wise counsel.

Will cherish this partnership that saw us working on a number of global challenges.

Gave the SG a Maldivian Boduberu as a parting gift pic.twitter.com/t5JHYmhK5h

Shahid was elected the President of UNGA with 143 votes. He beat his rival, former Afghan Foreign Minister Zalmai Rassoul with a margin of 48 votes. He made history by becoming the first Maldivian to hold such a high position within the UN.

He named his tenure ‘Presidency of Hope’, focusing on five ‘rays of hope’;

He had launched multiple initiatives to reach his objectives, including awarding scholarships.

Shahid will be succeeded by former Sustainable Environment Director at the Hungarian President’s Office, Csaba Korosi, who was elected the 77th President of the UNGA back in June.