Imam: Delivered sermons in Addu dialect so more would understand 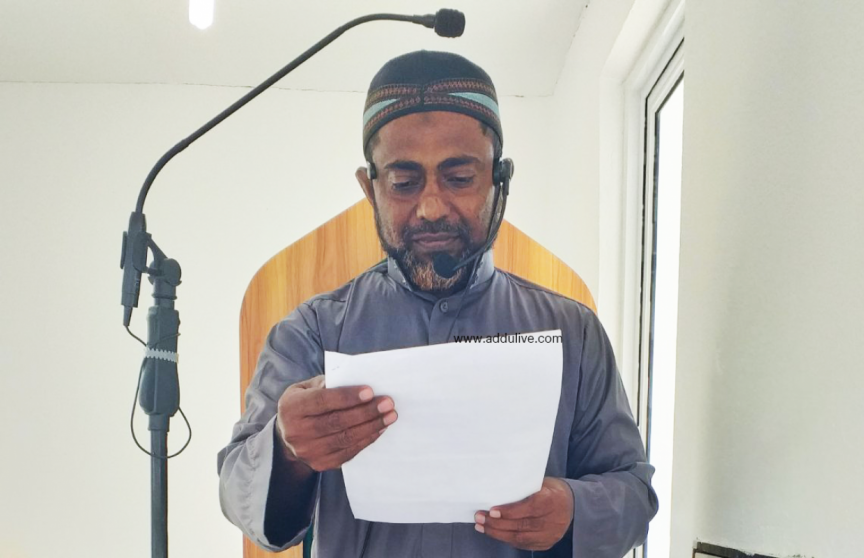 Imam Mohamed Rasheed, from Addu’s Meedhoo district, who has been suspended for delivering the Friday sermon in the Addu dialect. (Photo / AdduLive)

Imam Mohamed Rasheed, from Addu’s Meedhoo district who has been suspended for delivering the Friday sermon in the Addu dialect, revealed that he did this so that more would understand what was being said.

Noting that prayer-goers included many expatriates who did not understand the official Dhivehi, as well as the elderly, the Imam shared details of the incident with Sun.

Mohamed Rasheed was leading the Friday prayer at the Masjid Majudhudheen on September 2.

As per him, when delivering sermons, the highest priority should be to do so in a manner that most are able to understand. He added that mosques are freqented mostly by the elderly and expatriates, who find the Addu dialect easier.

“The Bangladeshi expatriates who reside in Addu for work do not understand when they are spoken to in formal Dhivehi. Look at the mosques. Mostly there are expatriates. The number of youth is very less. They [experiates] say they do not understand when it [sermons] is delivered in formal Dhivehi. Some even question why it is not read in the Addu dialect. So I thought they need to understand the message we are giving.”

He went on to add that apart from expatriates, the elderly are the ones going to the mosque more frequently than the youth.

“They also don’t know some words when said in formal Dhivehi. These elderlies do not even speak in the formal dialect.”

Addressing the issue, the Spokesperson for the President’s Office Miuvaan Mohamed said that the issue was not that it was delivered in the Addu dialect, but because the Imam went against the policies set by the Ministry of Islamic Affairs.

“The regulations state that it is the sermon handed out by Islamic Ministry which must be delivered at all islands. That no changes should be brought to it. But because of what was done in Addu, there were discrepancies on the levels of formality in language. Some have said that as a result, they were able to interpret (the sermon) in a way that the prophet’s stature was lowered,” said Miuvan

However, Mohamed said that this was false and that the dialect was the only change brought to the sermon.

An official from Addu City Council told Sun that many of the worshippers had found it “funny” when the imam delivered the sermon in the Addu dialect.

He said many left the mosque in anger, accusing the imam of contempt for the sermon.

“When the dialect was changed, there are changes to ‘us’ and ‘you’ when it’s in Addu dialect. Some people found it funny. Some people hated it. Some people left the mosque. The incident was so serious the purpose of the sermon was lost,” said the official.

But the Imam denies this and said that he was not aware of anyone in the mosque at the time finding it funny and acting inappropriately.

In addition to this, he noted that the sermons sent by Islamic Ministry often have major errors, which he has had to correct prior to delivering them.

“There are written errors. Translations of verses of the Quran are written wrong. There are mistakes about the Prophet’s companions.”

Addressing the suspension, he said that there are those who stalk him in the Council Office itself but made no further comments on the matter.

The 52-year-old had previously worked in the Tourism Industry. He had left the position of Assistant Manager at a resort to study the Imam program in 2004.

End date of MP Haitham’s leave to be inquired