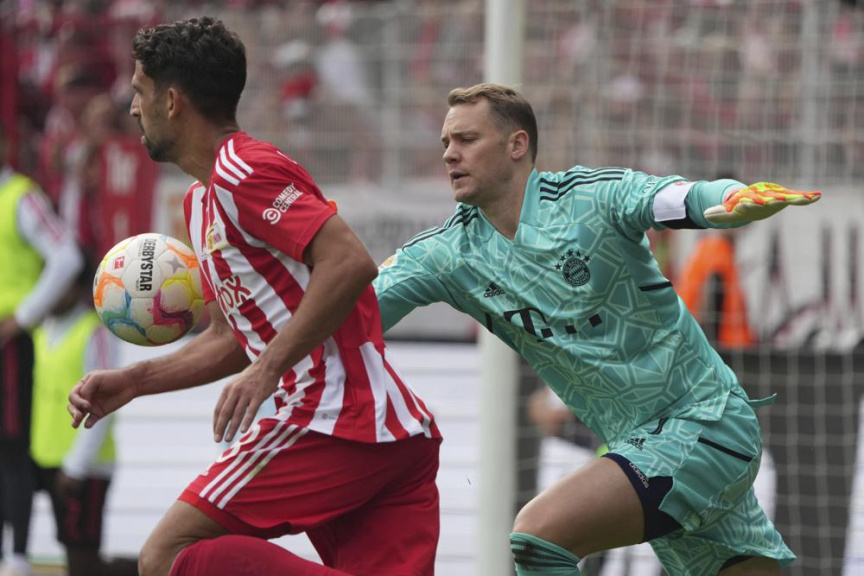 BERLIN (AP) — Bayern Munich was held to 1-1 at Union Berlin while Freiburg moved to the top of the Bundesliga after outlasting Bayer Leverkusen 3-2 on Saturday.

Freiburg is ahead of second-placed Borussia Dortmund on goal difference. Bayern and Union were still tied on points but in third and fourth place.

Thomas Müller set a club record with his 633rd appearance for Bayern when he went on as a second-half substitute. He equaled Oliver Kahn’s previous mark midweek.

Sheraldo Becker struck for Union Berlin in the 12th minute. The striker used one touch of his right boot to volley a free kick by Christopher Trimmel just inside the far post of Manuel Neuer.

Bayern pummeled Berlin’s area in search of a reply that came three minutes later when Joshua Kimmich drilled a low shot into the packed area. His strike took a slight deflection off a defender.

Bayern had the better scoring chances the rest of the way but Union goalkeeper Frederik Ronnow saved shots by Leroy Sané, Sadio Mané and Alphonso Davies to protect the point for the hosts.

American forward Jordan Pefok did not play for Union due to a muscle injury. He has scored twice since joining Union from Swiss side Young Boys this summer.

Freiburg took the league lead after coming out on top of a thriller in Leverkusen.

Kerem Demirbay gave the hosts the early lead, only for Matthias Ginter and Michael Gregoritsch to score for Frieburg in the 48th and 51st. Patrik Schick briefly pulled Leverkusen level but Ritsu Doan grabbed the 72nd-minute winner.