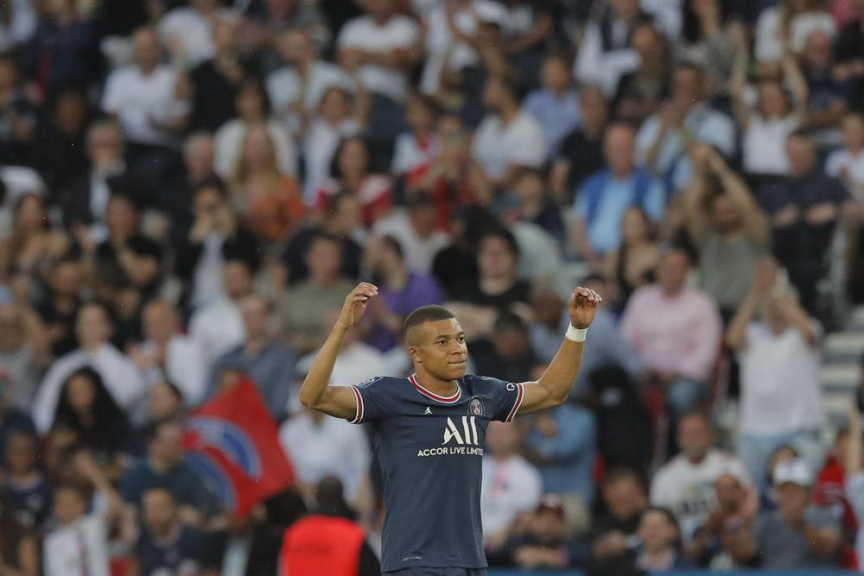 PSG's Kylian Mbappe reacts to the crowd after scoring a goal during the French League One soccer match between Paris Saint Germain and Metz at the Parc des Princes stadium in Paris, France, Saturday, May 21, 2022. (AP Photo/Michel Spingler)

PARIS (AP) — Undefeated in six league matches including five wins and 24 goals scored, Paris Saint-Germain and Kylian Mbappé are in scintillating form ahead of next week’s Champions League clash with Juventus.

Mbappé scored twice from Lionel Messi assists as they won 3-0 at 10-man Nantes to remain leader of the French league on Saturday.

But the French champions were dealt a blow from Vitinha’s apparent knee injury. The Portuguese midfielder was forced off the pitch in the first half after falling on the turf following a late tackle from defender Fabio, who was sent off.

PSG coach Christophe Galtier said Vitinha took a “big knock on his knee cap” but did not say whether he could recover in time for Tuesday’s match against the Serie A side at the Parc des Princes.

Nantes trailed from the 17th minute after Mbappé’s superb goal with a curled right-footed shot from the left side of the box into the opposite corner. He was set up by Messi on the break.

Messi was again the provider for Mbappé’s seventh goal — this time from close range — which was initially disallowed for offside in the 53rd but given after a VAR check.

Nuno Mendes completed the scoring in the 67th from the rebound after Neymar hit the post.

PSG leads undefeated Marseille in the standings on goal difference.

After missing a penalty midweek, Alexis Sanchez made amends to cap Marseille’s 2-0 win at Auxerre with his third goal in five league matches.

Sanchez, who joined Marseille from Inter Milan last month on a free transfer, came off the bench near the hour mark and sealed Marseille’s fifth league win in the 83rd minute with a low shot from Matteo Gendouzi’s back pass.

Marseille has 16 of a possible 18 points. Every time the nine-time champions have managed to remain unbeaten in their six opening matches in the 21st century, they have finished the season in the top three.

Marseille will travel to Tottenham next week for the start of its Champions League campaign and coach Igor Tudor rotated his players ahead of the big game in London. Tudor made seven changes, with Sanchez among those left on the bench after he missed from the spot in the 1-0 win against Clermont.

It took only eight minutes for the Marseille visitors to find the net when Gerson scored from the rebound after Cengiz Under dribbled past an Auxerre player in the box and hit the post.

Auxerre, which returned to the top-flight after an 11-year absence, was under pressure throughout the first half as Marseille dominated possession in an efficient 3-4-3 system. The hosts played better in the second half but could muster only half-chances.

After being decisive midweek with the winner against Auxerre, Toko Ekambi put the hosts in front against his former team in the 31st minute and scored again near the hour mark.

Alexandre Lacazette, Castello Lukeba and Moussa Dembele were also on the scoresheet for third-placed Lyon.

Winless Leicester in turmoil after 5-2 loss at Brighton