Nasheed: Believing the coalition will remain is a mirage 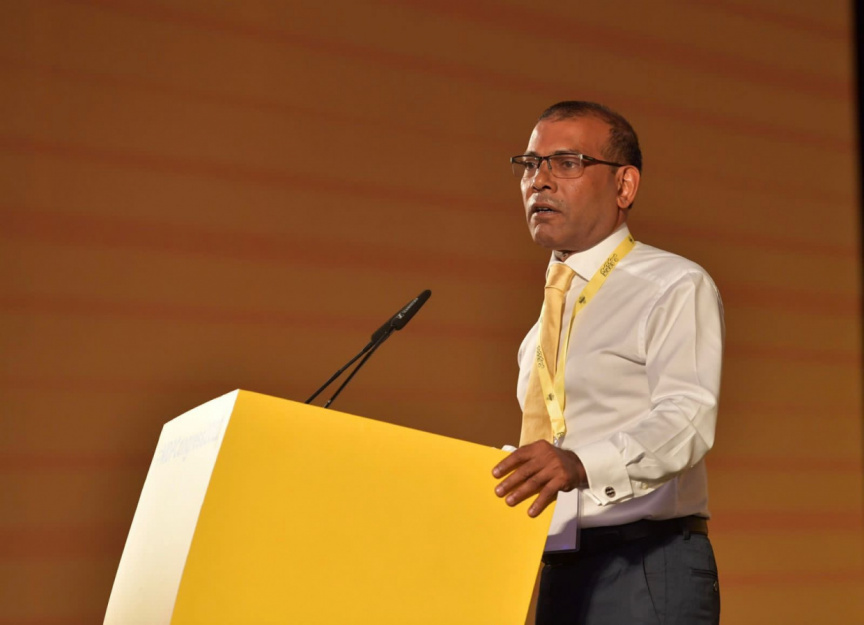 Maldivian Democratic Party’s (MDP) leader, Parliament Speaker Mohamed Nasheed, on Friday, has stated that believing the political parties currently in the government coalition will remain with MDP for next year’s presidential election is a mirage.

Speaking at the inaugural ceremony of MDP’s fourth congress – Nasheed said that this was not the year 2018. He detailed that when the presidential election was above the head during that year, all opposition leaders remained jailed. He added that it was through MDP’s hard work that peace was restored in the Maldives.

“The chance to carry out peaceful political activities has been guaranteed once again. All our coalition leaders remain independent. There are working hard, to ensure success in 2023’s election. That is how we want for competitive political activities. That is also how we will work,” he had said.

Nasheed’s remarks regarding the government’s coalition comes at a Jumhoory Party, a coalition partner, has announced that they will endorse a candidate for next year’s presidential election. However, JP’s leader Qasim Ibrahim stated that it is the party’s congress which will decide on whether the party will compete in the election, by themselves, or through a coalition.

Speaking further at tonight’s ceremony, Nasheed said that MDP cannot succeed unless all its members are together. Noting that the members are aware of this fact – he stressed that the party would receive less votes if all members do not work together as they face next year’s presidential election.

He went onto state that MDP will achieve no success if the party moves forward by disregarding on the views and feelings of people that support and love MDP at present.

“Therewith, honorable president, I am requesting that you move forward with all members of the party. There is no way we can achieve success unless through that road,” he had said.

Also at tonight’s ceremony, Nasheed described MDP as a political party that is always of change. Stressing that constraints are an obstruction to development – he said that MDP is a party which provides a solution through change.

He further stated that philosophy MDP was birthed on – was to inquire ways to govern with closeness to the people. In this regard, he said that some members of the party wish to change the governing system of the Maldives.

Nasheed said that MDP’s congress will be platform to solve issues with the party, and bring about the changes desired by the party.

MDP’s fourth congress which commenced tonight and is set to continue for a three-day period. The agenda of the congress includes amendments proposed to the party’s constitution and a resolution submitted by the party’s leader, Mohamed Nasheed, regarding holding a constitutional referendum to change the governing system.