With fires raging in Europe, France detains man over blaze 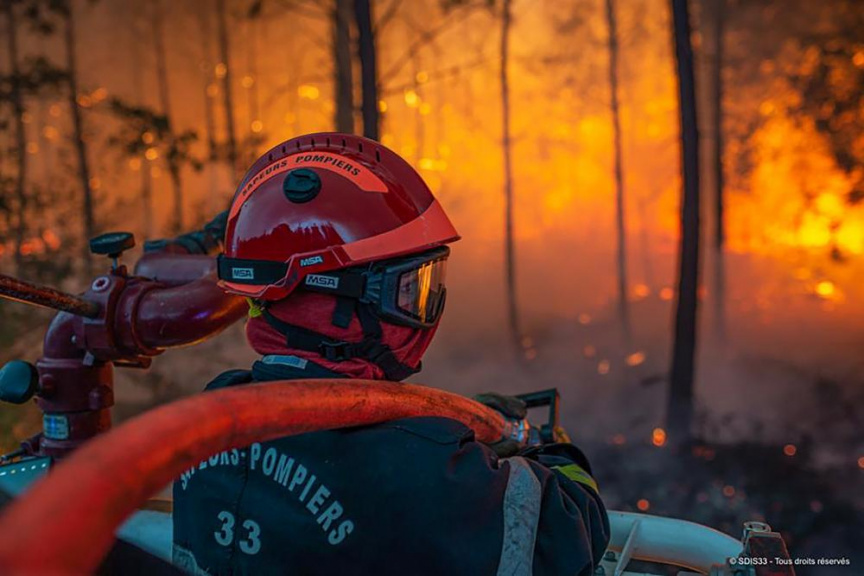 This photo provided by the fire brigade of the Gironde region (SDIS 33) shows a firefighter at work at a forest fire at La Test-de-Buch, southwestern France, late Monday, July 18, 2022. (SDIS 33 via AP)

LA TESTE-DE-BUCH, France (AP) — Investigators probing the suspected deliberate lighting of what has become a raging wildfire in southwest France detained a man for questioning, as firefighters and water-bombing planes on Tuesday fought ferocious flames there and in other parts of Europe that have baked in extreme heat.

Smoke from a large forest fire fanned by high winds blackened the skyline in Greece’s capital Tuesday. Firefighting aircraft buzzed over the flames and dropped water on the slopes of Mount Penteli, 25 kilometers (16 miles) northeast of the city. Officials ordered hundreds of people to evacuate their homes.

In the Gironde region of southwest France, two massive fires feeding on tinder-dry pine forests also have forced tens of thousands of people to flee homes and summer vacation spots since they broke out July 12.

One of the blazes, tearing through woodlands south of Bordeaux, is suspected to have been started deliberately. A motorist told investigators that before pulling over and trying unsuccessfully to extinguish the flames, he saw a vehicle speeding away from the spot where the fire started, the Bordeaux prosecutor’s office said.

The 39-year-old man being questioned Tuesday lives in Gironde and was detained Monday afternoon, the office said. He also was questioned in 2012 on suspicion of starting a forest fire but that investigation was shelved in 2014 for lack of evidence, the prosecutor’s office added.

Ten water-bombing planes and more than 2,000 firefighters worked day and night to contain that fire and another fierce blaze southwest of Bordeaux that police investigators were treating as accidental. The blazes have burned through more than 190 square kilometers (more than 70 square miles) of forest and vegetation, Gironde authorities said.

Thick clouds of smoke and the risk of flames spreading to buildings have forced the evacuations of more than 39,000 people, including 16,000 on Monday, authorities said. A smaller third fire broke out late Monday in the Medoc wine region north of Bordeaux, further taxing regional firefighting resources.

Swirling winds and extreme heat have complicated firefighting. Record-smashing temperatures eased along France’s Atlantic seaboard Tuesday while other parts of the country and the continent continued to broil.

In Paris, the thermometer in the French capital’s oldest weather station – opened in 1873 – topped 40 degrees Celsius (104 degrees Fahrenheit ) for just the third time. The 40.5 C (104.9 F) measured there Tuesday by weather service Meteo-France was the monitoring station’s second-highest reading ever, topped only by a blistering 42.6 C (108.7 F) in July 2019.

The people evacuated Monday included 74 residents of a retirement home, authorities said. Another 80 care-home residents were among 2,000 people getting moved out Tuesday from the latest of more than a half-dozen towns and villages that were ordered to evacuate, authorities said.

Approaching flames also forced the emergency evacuation Monday of 363 animals from a zoo in the Arcachon maritime basin, southwest of Bordeaux, the government’s ecological transition ministry said Tuesday. About 10 animals died of heat and stress, the ministry said.

Five camping sites also went up in flames in that area, which is famous for its oysters and beach resorts, Gironde authorities said.

The double blow of heat waves and droughts exacerbated by climate change are making wildfires more frequent, destructive and harder to fight. In Spain, the prime minister has linked wildfires that have killed two people to global warming, saying Monday that “climate change kills.”

The head of Spain’s Civil Protection and Emergencies agency, Leonardo Marcos González, noted Tuesday that extreme heat and wildfires have hit the country three weeks earlier than usual this year and that many fires broke out at the same time.

“We are in the midst of the most significant civil protection emergency on record,” he told radio station SER.

In charred countryside near Barcelona, Ricardo Serra and Julia Garrido returned Tuesday to the wreckage of their home. They’d been renovating it for the upcoming wedding of Garrido’s son.

“Everything’s been burnt,” she said. “All of our wedding clothes.”

In Portugal, cooling temperatures have eased pressure on emergency crews, with just two major wildfires being tackled by around 800 firefighters Tuesday. But more torrid weather is forecast for Wednesday.

Authorities suspect a wildfire was to blame for the death of a couple in their 80s whose car went off the road and flipped over in a northern Portuguese village late Monday. Their charred vehicle with two bodies inside was found after a blaze engulfed the area. Officials suspect the couple died while trying to flee the flames.

The pilot of a water-dumping plane also died in Portugal last week when his aircraft crashed while fighting a wildfire.

Whale stranded in French river to be moved to saltwater