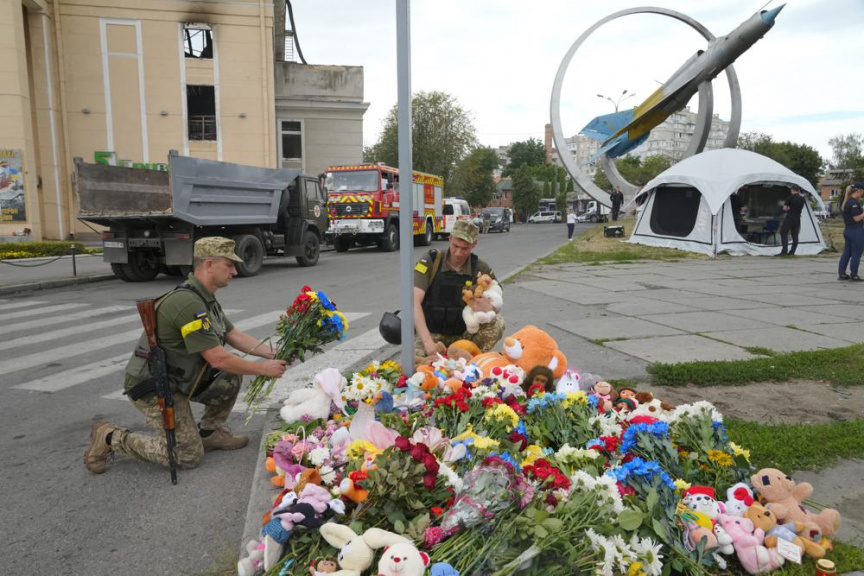 The attack on Dnipro came a day after a Russian missile strike killed at least 23 people and wounded more than 200 in Vinnytsia, a city southwest of Kyiv, the capital.

Russia’s military campaign has been focusing on the Donbas in Ukraine’s east, but Russian forces also have been pounding other parts of the country in a relentless push to wrest territory from Ukraine and soften the morale of its leaders, civilians and troops as the war nears the five-month mark.

The regional governor, Valentyn Reznichenko, said the missiles hit the factory and nearby streets, killing at least three people and wounding 15.

Airstrikes also were reported in Kremenchuk, another city along the Dnieper River south of Kyiv.

“The occupiers are realizing that we are gradually becoming stronger and the purpose of their terror is very simple — to put press on us, to put pressure on our society, to intimidate people, to cause maximum harm to Ukrainian cities, at least while the Russian terrorists are still capable of doing it,” he said in his nightly video address to the nation.

The attack on Vinnytsia by cruise missiles launched from a Russian submarine was the latest to fan international outrage since Russian President Vladimir Putin began the invasion on Feb. 24. The dead included three children: a 4-year-old girl, and two boys, 7 and 8.

“She was reaching for her daughter, and Liza was already dead,” the mother’s aunt, Tetiana Dmytrysyna, told The Associated Press on Friday. “The mother was robbed of the most precious thing she had.”

A video of Liza playing earlier in the day and a photo of her lifeless body have gone viral worldwide.

Ukraine’s Interior Ministry said Friday that Russian forces had conducted more than 17,000 strikes on civilian targets during the war, killing thousands of fighters and civilians and driving millions from their homes. The invasion has also rippled through the world economy by hiking prices and crimping exports of key Ukrainian and Russian products such as grain, fuel and fertilizer.

As the fighting raged, Russia noted progress in talks on a possible deal to allow Ukraine to use the Black Sea to export millions of tons of grain that could help feed a world facing shortages and higher food prices.

Alluding to talks in Istanbul this week among Russia, Turkey, Ukraine and the United Nations, Russian Defense Ministry spokesman Lt. Gen. Igor Konashenkov said a final document had been prepared and that other participants had “largely supported” Russian proposals to help ease grain shipments through Ukrainian ports.

He said work on the “Black Sea initiative” was to be completed shortly to allow shipments of food “while excluding the use of those logistical chains for the deliveries of weapons and military equipment” to Ukraine. He also said the plan seeks to “prevent any provocations.”

About 22 million tons of grain have been stuck in Ukraine because of the war.

It was the most extensive Russian comment yet on the grain talks, which mostly involved military officials. U.N. Secretary-General Antonio Guterres said Russia and Ukraine had taken “a critical step” toward ensuring exports of the desperately needed grain.

“Russia deliberately hit civilians and all those responsible for the crime must be brought to account,” said Vinnytsia Gov. Serhiy Borzov, denouncing the “barbaric behavior by Russia that tramples on international humanitarian law.”

“There is no answer to the question why yesterday, and why in Vinnytsia,” Tymoshenko said. “We expect every second and minute that this could happen in any corner of Ukraine.”

After initial silence about the missile strikes on Vinnytsia, Russia’s Defense Ministry said Friday that its forces had struck an officers’ club — the Soviet-era use of the concert hall.

“Participants of the meeting were eliminated in the strike,” Konashenkov said.

His claim couldn’t be independently verified. Ukrainian authorities have insisted the site had nothing to do with the military.

A Ukrainian singer reported that she had been scheduled to perform in the concert hall Sunday and that her sound engineer was killed in the missile strike. The singer, Roxolana, said on social media that another member of her crew was seriously injured.

Ukraine’s presidential office said early Friday that three civilians were killed over the past 24 hours in the Donetsk region, which along with the neighboring Luhansk region — now nearly totally controlled by Russian forces — makes up the broader Donbas.

“The situation in the Donetsk region is exacerbating every day, and civilians must leave because the Russian army is using scorched-earth tactics,” Donetsk Gov. Pavlo Kyrylenko said. It appeared that the cities of Kramatorsk and Sloviansk were next in line for attacks by Russian forces.

The Russian news agency Tass, citing Russian-backed separatists, reported Friday that two civilians were killed and six injured after they said Ukrainian forces shelled a bus terminal in the city of Donetsk a day earlier.

Also, a British aid worker detained by the Donetsk separatists has died in captivity, a separatist official and a U.K. charity involved with his case said Friday.