Britain’s Boris Johnson battles to stay as PM amid revolt 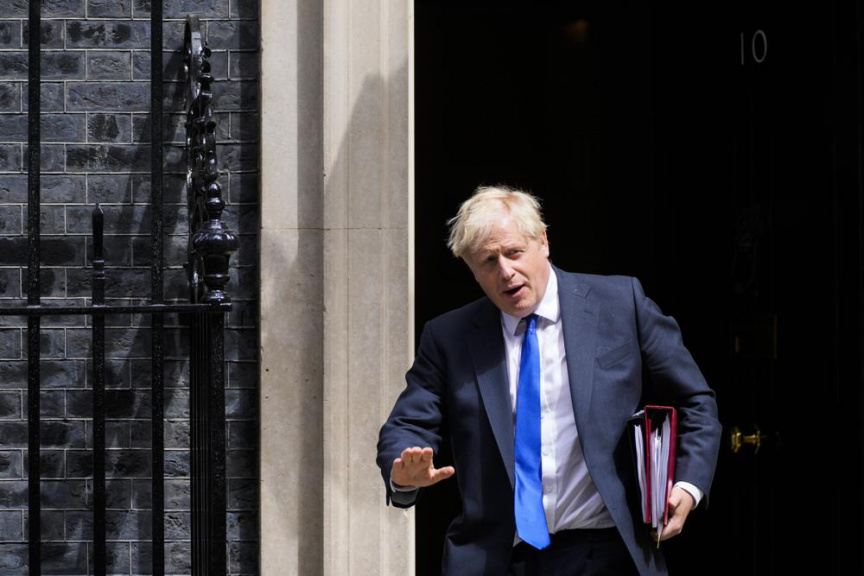 LONDON (AP) — British Prime Minister Boris Johnson battled to remain in office Wednesday, brushing off calls for his resignation after three Cabinet ministers and a slew of junior officials said they could no longer serve under his scandal-plagued leadership.

Johnson rejected demands that he step down during a stormy session of the House of Commons amid a furor over his handling of sexual misconduct allegations against a senior official. Later in the day, a delegation of some of his most trusted allies in the Cabinet paid a visit to the prime minister at 10 Downing Street to urge him to go, but he remained unmoved, Britain’s Press Association reported.

The prime minister turned down suggestions he seek a “dignified exit” and opted instead to fight for his political career, citing “hugely important issues facing the country,” according to the news agency. It quoted a source close to Johnson as saying he told colleagues there would be “chaos” if he quit.

The 58-year-old leader who pulled Britain out of the European Union and steered it through the COVID-19 outbreak is known for his ability to wiggle out of tight spots, managing to remain in power despite allegations that he was too close to party donors, that he protected supporters from bullying and corruption allegations, and that he misled Parliament about government office parties that broke pandemic lockdown rules.

He hung on even when 41% of Conservative lawmakers voted to oust him in a no-confidence vote last month.

But recent disclosures that Johnson knew about sexual misconduct allegations against a lawmaker before he promoted the man to a senior position pushed him to the brink.

In holding on to his office, Johnson is attempting to defy the mathematics of parliamentary government and the traditions of British politics. It is rare for a prime minister to cling to power in the face of this much pressure from his Cabinet colleagues.

“He is now besmirching our democracy, and if he doesn’t do the right thing and go of his own accord, then he’ll be dragged out,” Scottish National Party leader Ian Blackford told the BBC.

Many of Johnson’s fellow Conservatives were concerned that he no longer had the moral authority to govern at a time when difficult decisions are needed to address soaring food and energy prices, rising COVID-19 infections and the war in Ukraine. Others worry that he may now be a liability at the ballot box.

On Wednesday, members of the opposition Labour Party showered Johnson with shouts of “Go! Go!” during the weekly ritual of Prime Minister’s Questions in the House of Commons.

More damningly, members of Johnson’s own Conservative Party — wearied by the many scandals he has faced — also challenged their leader.

“Frankly … the job of the prime minister in difficult circumstances, when he’s been handed a colossal mandate, is to keep going,” Johnson replied with the bluster he has used to fend off critics throughout nearly three years in office. “And that’s what I’m going to do.”

Former Health Secretary Sajid Javid, who helped trigger the current crisis when he resigned Tuesday night, captured the mood of many lawmakers when he said Johnson’s actions threaten to undermine the integrity of the Conservative Party and the British government.

“At some point we have to conclude that enough is enough,” he told fellow lawmakers. “I believe that point is now.”

Under party rules, another no-confidence vote cannot be held for another 11 months, but party members can change the rules. The 1922 Committee, a small but influential group of Conservative lawmakers, could decide as early as Monday whether to do that.

Javid and Treasury chief Rishi Sunak resigned within minutes of each other over the latest furor. The two Cabinet heavyweights were responsible for tackling two of the biggest issues facing Britain — the cost-of-living crisis and COVID-19.

In a scathing letter, Sunak said: “The public rightly expect government to be conducted properly, competently and seriously. … I believe these standards are worth fighting for and that is why I am resigning.”

The resignations of some 40 junior ministers and ministerial aides followed on Tuesday and Wednesday. A third Cabinet official, Welsh Secretary Simon Hart, quit late Wednesday, saying “we have passed the point” where it’s possible to “turn the ship around.”

As Johnson dug in, critics accused him of refusing to accept the inevitable and of behaving more like a president than a prime minister by referring to his “mandate.” In Britain, voters elect a party to govern, not the prime minister directly.

“It’s a bit like the death of Rasputin: He’s been poisoned, stabbed, he’s been shot, his body’s been dumped in a freezing river, and still he lives,” Mitchell told the BBC. “But this is an abnormal prime minister, a brilliantly charismatic, very funny, very amusing, big, big character. But I’m afraid he has neither the character nor the temperament to be our prime minister.”

The final straw for Sunak and Javid was the prime minister’s handling of sexual misconduct allegations against Conservative lawmaker Chris Pincher.

Last week, Pincher resigned as deputy chief whip after complaints he groped two men at a private club. That triggered a series of reports about past allegations leveled against Pincher — and shifting explanations from the government about what Johnson knew when he tapped the man for a senior job enforcing party discipline.