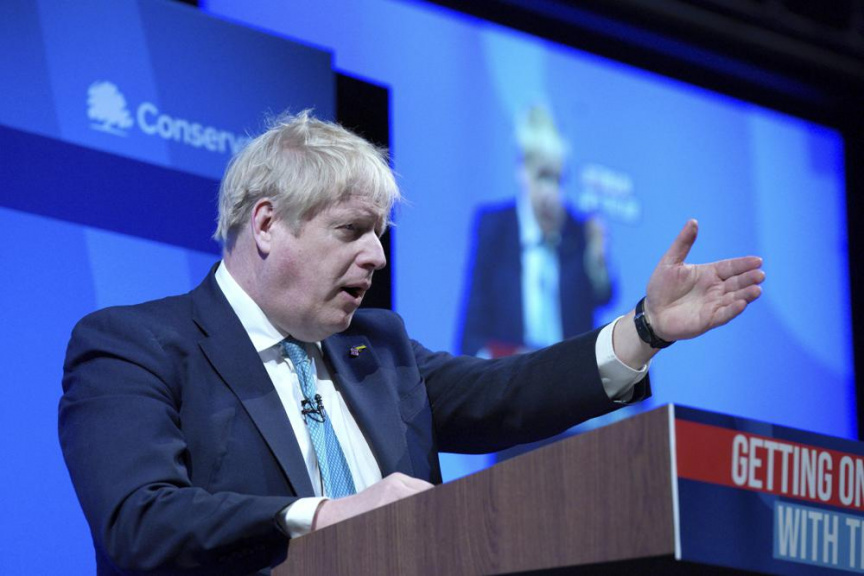 LONDON (AP) — British Prime Minister Boris Johnson said Saturday that Russia’s invasion of Ukraine was a “turning point for the world,” arguing that a victory for Russian President Vladimir Putin’s forces would herald “a new age of intimidation.”

But the British leader was accused by opponents of making a crass comparison by likening Ukraine’s fight against invasion to the U.K.’s exit from the European Union.

Speaking to a Conservative Party conference in Blackpool, northwest England, Johnson claimed Putin was “terrified” that the example of a free Ukraine would spark a pro-democracy revolution in Russia.

“That is why he is trying so brutally to snuff out the flame of freedom in Ukraine and that’s why it is so vital that he fails,” Johnson said.

Johnson praised Ukrainians’ defence of their country, and added that it was also “the instinct” of people in the U.K. “to choose freedom.” As an example, he said British voters opted in a 2016 referendum to leave the EU “because they wanted to be free to do things differently and for this country to be able to run itself.”

Johnson helped lead the campaign for the U.K. to leave the bloc it joined in 1973. Britain’s departure, eventually completed in 2020, remains highly divisive.

“To compare a referendum to women and children fleeing Putin’s bombs is an insult to every Ukrainian,” he said.

Gavin Barwell, who served as chief of staff to former Conservative Prime Minister Theresa May, said “voting in a free and fair referendum isn’t in any way comparable with risking your life to defend your country against invasion.”

Barwell also pointed out that Ukraine has asked to join the EU.

Boris Johnson battles to stay as PM amid revolt