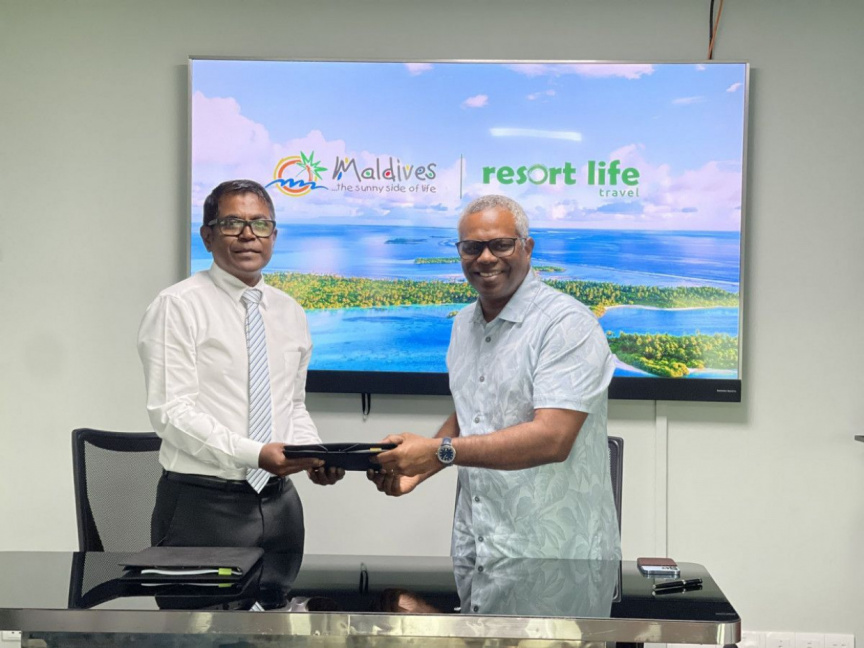 MMPRC signs agreement with Resort Life Travel for the joint promotion of Maldives as a tourist destination in European markets including Russia & CIS, Central and Eastern Europe. (Photo/MMPRC)

Maldives Marketing and Public Relations Corporation (MMPRC) has signed an agreement with local Destination Management Company, Resort Life Travel, for the joint promotion of Maldives as a tourist destination in European markets including Russia & CIS, Central and Eastern Europe.

MMPRC detailed that the agreement was executed as part of their strategies to create synergy with local travel and tour operators in order to work to promote the destination and strengthen global brand visibility. They said it will also assist in maintaining the increase in arrivals from European markets by establishing a constant destination presence in these markets.

Under the agreement – Resort Life Travel will use the branding, name, logo of MMPRC in all events, and promotions – whether online or offline – that they take part in the Russia & CIS, Central and Eastern Europe markets.

Commenting on the partnership, Thoyyib said that this was the first time MMPRC has initiated such a major collaboration with a local company – adding he hopes it would set a good example for others.

“We are embarking on a journey to begin working even more closely with local tour operators, who have been doing remarkably well during the pandemic, even the aftermath of the crisis. We can use the strengths of partners like resort life, to further our common goal of marketing the destination,” he also said.

Stressing that similar opportunities were open for other local companies as well – Thoyyib urged them to come forward with good collaboration proposals.

Shaaz said that MMPRC’s decision to collaborate with a local company was a historical milestone.

He also noted that Maldives has regained the Russian market once again after a stoop experienced amidst the Ukraine-Russia war.

“What facilitates the biggest easement in combatting the current difficulties we face is the fact that we an office established at Russia,” Shaaz also said.

He stressed that new markets have also emerged from the region.

Maldives welcomes one millionth tourist of 2022