Salaf denies involvement in riot, states it does not condone violence 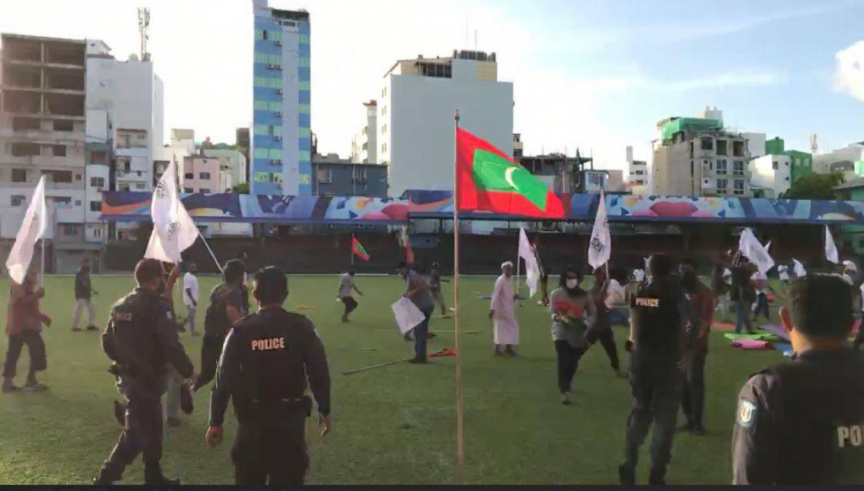 Mob storms the national football stadium during an event held to celebrate International Day of Yoga on June 21, 2022. (Photo/Twitter/Shiuna)

Local NGO, Jamiyyath Salaf has denied involvement in the riot which took place after a group of men stormed an event held at the national football stadium in Male’ City to celebrate International Day of Yoga and threatened and assaulted some of the participants.

In a statement on Tuesday afternoon, Salaf denied the allegation by Sports Minister Ahmed Mahloof that the NGO had been involved in the riot.

Salaf said that the allegation by Mahloof, given his position as the head of the regulatory authority of NGOs, was “dangerous”, and an irresponsible act designed to incite hatred towards the NGO.

“The allegations against us by Minister Mahloof are false. We condemn it in the harshest terms. The allegation made with complete disregard of facts is a dangerous allegation. The sole purpose is to incite hatred towards this organization among members of the general public,” said the NGO.

Salaf said it had been involved in creating awareness and educating people regarding Islamic tenents ever since yoga was introduced to Maldives.

But under no circumstances do we support taking the country’s independence outside the legal system, destruction of private and public property, and confronting peace keepers and committing violent acts, said the NGO.

Salaf said that it had also issued a statement denying involvement in plans to gather outside the stadium to protest against the event, before the incident took place.

A group of men had stormed the stadium shortly after the yoga event began at 06:30 am. They threatened and assaulted some of the participants, and destroyed property.

The rioters were stopped by some six police officers stationed at the stadium using pepper spray. Six rioters were arrested.

President Ibrahim Mohamed Solih tweeted on Tuesday morning that the incident was being treated as a matter of serious concern and that those responsible would be swiftly brought before the law.

The incident is under investigation by the Serious and Organized Crime Department.