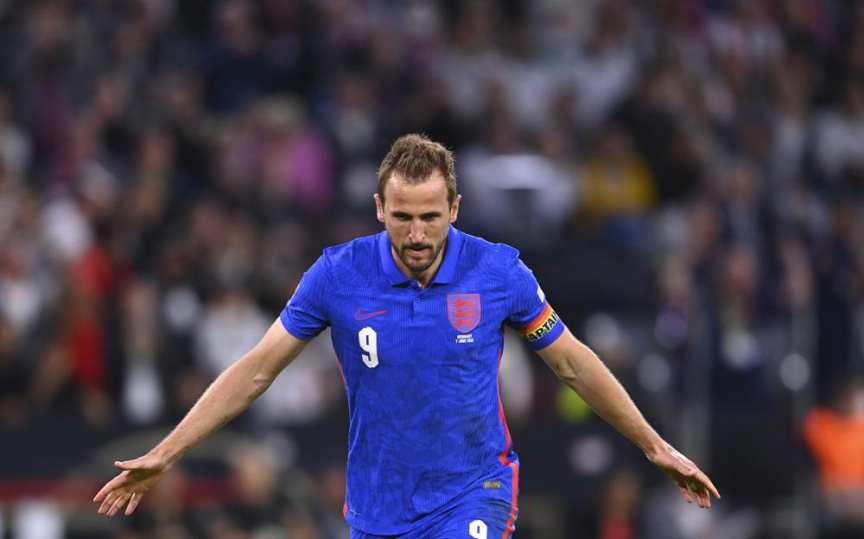 Kane slotted the equalizer from the spot in the 88th minute, though there was controversy over referee Carlos del Cerro Grande’s decision to award it after a VAR check as Kane looked to be offside before going down in a tangle with Germany defender Nico Schlotterbeck.

It had looked like Jonas Hofmann’s 51st-minute goal would give Germany a measure of consolation for losing to England at the European Championship last year and condemn Gareth Southgate’s team to its second consecutive loss after its 1-0 defeat to Hungary on Saturday.

But Kane, who missed several good chances, stayed cool to convert the best chance late on.

Germany coach Hansi Flick made seven changes to the team that drew in Italy 1-1 on Saturday, while Southgate made four to the side that lost in Hungary.

Both teams’ players knelt on one knee before kickoff in a stand against racism. The Munich stadium was also illuminated in rainbow colors as a sign against homophobia.

Germany made the better start, forcing two corners early on. Kyle Walker made a potentially goal-saving clearance off the line for England.

England midfielder Kalvin Phillips had to go off early after a clash with Schlotterbeck. Schlotterbeck’s 18-year-old Borussia Dortmund teammate Jude Bellingham came on for his 14th appearance in Phillips’ place.

Hofmann had a goal ruled for offside after a lengthy VAR check, then Kane fired over an empty goal from close range after a corner at the other end.

The 18-year-old Jamal Musiala, who was playing an outstanding game, fired a good opportunity at goalkeeper Jordan Pickford toward the end of the first half. There was still time before the break for Bukayo Saka to test Manuel Neuer, then shoot another chance just wide.

Germany failed to make more of further chances after Hofmann made the breakthrough.

Pellegrini finished off a well-worked team move on the stroke of halftime when Matteo Politano cut into the right side of the area and put in a low cross for the Roma midfielder to slot in at the far post.

It was Pellegrini’s second goal in as many matches for Italy, having also scored against Germany. Pellegrini scored nine times for Roma in Serie A last season and five times in the Europa Conference League to help his team win the trophy.

Nicolò Barella had scored Italy’s opener in the 30th minute. Leonardo Spinazzola controlled a long ball over the top and rolled it across the edge of the area for Barella to place a precise shot into the top left corner.

Italy was playing with renewed enthusiasm and had several chances to score a third. But the Azzurri allowed Hungary back into the game in the 61st minute when Gianluca Mancini turned a cross from substitute Attila Fiola into his own net.

It was nevertheless a convincing performance from Roberto Mancini’s team which is going through a rebuilding process again. European champion Italy did not qualify for a second consecutive World Cup and lost 3-0 to Argentina in the Finalissima last week.

Also, Turkey romped to a 6-0 win in Lithuania and Luxembourg enjoyed a 1-0 win in the Faeroe Islands.

Finland defeated Montenegro 2-0 and a goal from Smail Prevljak was enough for Bosnia-Herzegovina to defeat Romania 1-0.