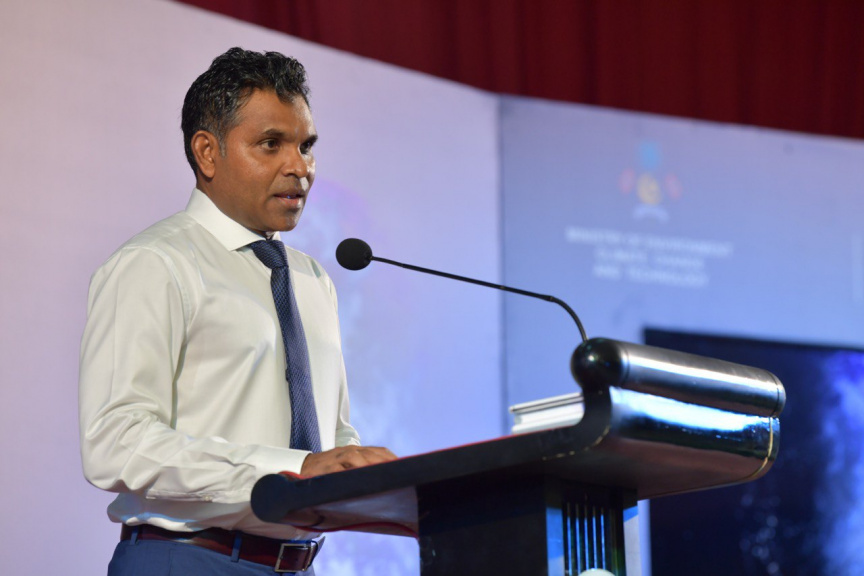 Speaking at the ceremony held in Fuvahmulah City to mark World Environment Day, he called on citizens to do their part in segregating waste. He noted that this day is marked to shine a global spotlight on the pressing environmental challenges of our time, including raising awareness of the detrimental effects of climate change.

He went on to say that it was an occasion when we should consider the dire outcomes of the depletion of our natural resources and described some of the effects of climate change, including the harmful effects of ozone layer depletion on humans and the environment, air pollution, and increased frequency of natural disasters.

Additionally, VP Naseem noted that the climate crisis is a long-debated international issue, and went on to shed light on the Maldives' efforts to raise awareness of the climate emergency and the threats that climate change poses to the survival of small island states.

Highlighting the gravity of the climate catastrophe, he reminded us that there was only one earth and that everyone must collectively take transformative action to celebrate, protect, and restore the planet.

"The low-lying archipelago of the Maldives is exposed to the risks of intensifying weather events induced by climate change. While the Maldives is at the forefront of climate advocacy. We must accept responsibility and work responsibly to reduce carbon emissions and plastic pollution."

Furthermore, he stressed on the need to adopt environmentally-friendly and sustainable lifestyles and help drive change in consumption habits, and secure the natural environment for future generations.

During this ceremony, the Fuvahmulah City Biosphere Reserve logo was unveiled, and the signing of the "Implementing Sustainable Low and Non-Chemical Development in SIDS" project, carried out in collaboration with the United Nations Development Program (UNDP).

The agreement was signed on behalf of the Maldives by Aminath Shauna, the Minister of Environment, Climate Change and Technology.

In addition to this, the Vice President presented letters of recognition to the winners of the "Only One Earth" book writing competition held at Sharafuddin School.

He had also participated in a bicycle rally held as part of the celebrations earlier on Saturday.