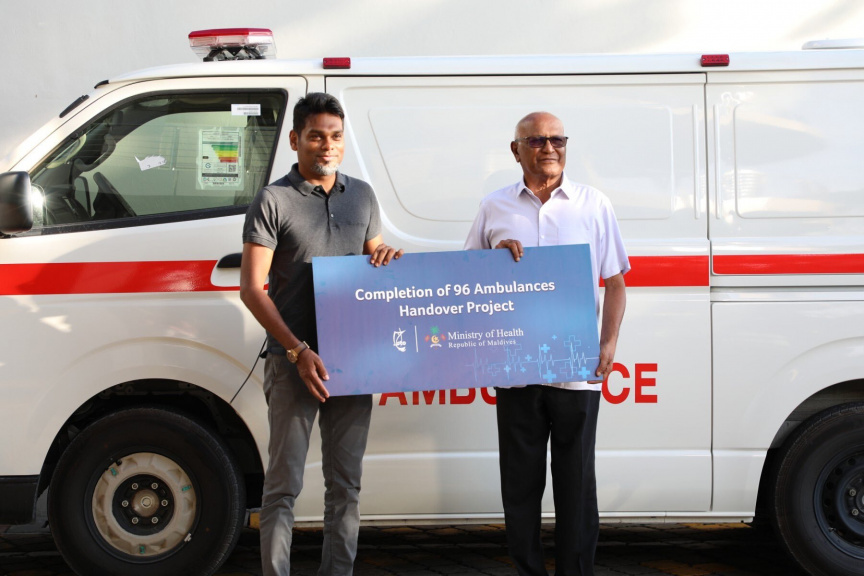 State Trading Organization (STO) has successfully handed over 96 ambulances to the Maldivian government to strengthen emergency response in islands outside the capital.

A ceremony was held on Tuesday evening to mark the successful completion of the project. The ceremony was attended by Health Minister Ahmed Naseem and STO’s Managing Director Hussain Amr Mohamed Rashad.

STO was tasked to procure 96 ambulances to improve the quality of health services in local islands under a Memorandum of Understanding (MoU) signed last year.

Naseem said that STO had always been readily available to help in times of need.

“It wasn’t just that they provided ambulances. They granted a three-year payment period. This isn’t something that it is of much benefit to the ministry. In reality, it is a hard and mammoth task,” he said.

Naseem said STO had rendered much of its assistance under Corporate Social Responsibility (CSR). He said that STO didn’t stop with just shipping in the ambulances, but also delivered the ambulances to the islands and transported old ambulances in the islands to Male’.

STO brought in the ambulances and delivered it to the islands in batches over the course of a couple of months.

STO posts net profit of almost half a billion