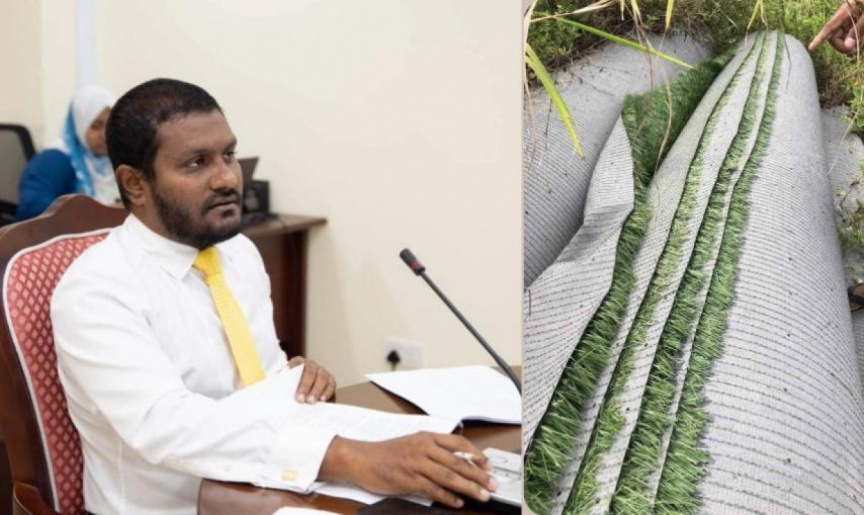 A combined photo of Ihavandhoo MP Mohamed Shifau (L) and turf rolls to be installed at Ihavandhoo stadium that was vandalized. (Photo/Social Media)

Turf rolls which were brought to HA. Ihavandhoo to be installed at the stadium currently under development on the island has been vandalized.

Ihavandhoo MP Mohamed Shifau alleged that the turf rolls were vandalized by the opposition. He described the act as a direct obstruction to youth development.

In a social media post publicized on Wednesday, MP Shifau said that the turf rolls had been vandalized by cutting it using a box cutter on Tuesday night, just as contractors geared up to install the turf rolls at the stadium.

He condemned the vandalism in strong words – describing it as a weak act by a group of people who wished against the development of the island.

Speaking to Sun, MP Shifau said that carrying out such an act as a longstanding dream of the youths neared coming to true was absolutely unacceptable. He also called on authorities to find the culprits and take necessary action against them.

“Turf was vandalized by opposition members. This is a lowly act obstructing the development of youths,” he added.

Shifau stressed that the vandalism will not impact the completion of the stadium. On this note, he said that the stadium will be completed within May.

“This will not delay the completion of works on the stadium. Youths, please do not be disheartened. By god’s will, the installation of turf will soon be completed. Will fulfill this pledge of President Ibrahim Mohamed Solih without delays,” he had said.

Speaking to Sun, Ihavandhoo Council President Ahmed Sobah said that this was an unacceptable act no matter who the culprit is. He added that the vandalism has been reported to the police.

“This is unacceptable, no matter who the culprit is. Council also condemns the act in strong words. Police are currently investigating the matter,” he had said.

Sobah also underscored that the turf rolls that were vandalized have been kept exposed to rain and sunlight for almost two years. He stressed some of them have been badly damaged as a result – over which youths have raised concerns on multiple occasions.

“Might have been an act carried out because they do not want damaged turf to be installed at the stadium. Youths have raised concern over the possible installation of damaged turf at the stadium on multiple occasions. On behalf of the council, we have relayed these concerns to the government and ministry,” he had said.

Ihavandhoo youths have planned a protest on the island for this evening, regarding the installation of damaged turf at the stadium.