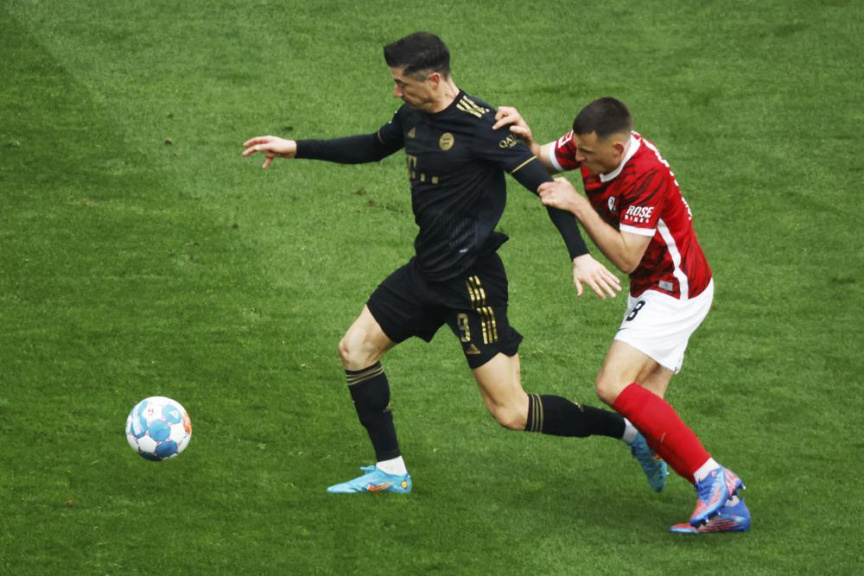 It didn’t matter on Saturday as others did for Bayern Munich to stretch its Bundesliga lead to nine points with a 4-1 win in Freiburg.

Leon Goretzka, Serge Gnabry, Kingsley Coman and Marcel Sabitzer got the goals as Bayern put the pressure on second-placed Borussia Dortmund, which slumped to a 4-1 loss at home to Leipzig. Six rounds remain.

Lewandowski recovered from a midweek injury scare to start but failed to add to his 31 league goals. Last season, the Poland star scored against Freiburg in the penultimate round to match Gerd Müller’s Bundesliga record of 40. He broke it in the final game of the season against Augsburg.

Bayern had more of the ball in the first half against Freiburg but struggled to create clear-cut chances against the well-organized home team.

Freiburg’s first lapse led to the opener, scored by Goretzka in the 58th with a header to Joshua Kimmich’s free kick. Goretzka was making his first start since Dec. 4.

Bayern’s Serge Gnabry repeated the feat in the 73rd after replacing Benjamin Pavard. The Germany forward fired inside the left post after Nico Schlotterbeck failed to deal with Lucas Hernández’s cross.

Coman added a brilliant strike from distance in the 82nd, and Sabitzer completed the scoring in the sixth minute of injury time. It was the Austrian’s first goal in the Bundesliga.

Sabitzer went on in the 86th for Coman but there was some confusion around the substitution as it appeared Bayern may have briefly played with 12 players. There was a holdup in play and heated discussion among players and officials before referee Christian Dingert allowed the game to continue.

Dortmund welcomed a capacity 81,365 spectators for its first home game in a full stadium in more than two years. Fans marched together to the Westfalenstadion and many lit yellow flares before kickoff to celebrate the end of coronavirus restrictions.

But the visitors spoiled the party.

Konrad Laimer scored twice for Leipzig early on, the first in the 21st minute when he forced Emre Can to lose the ball and Christopher Nkunku played it in for him to lift it over Gregor Köbel in the Dortmund goal.

Laimer let fly from distance to score thanks to a deflection from Can in the 30th, when Nkunku was again involved.

Dortmund struggled to respond and the trend continued after the break.

Nkunku got the third goal in the 57th when he combined with Dani Olmo and Laimer – who returned the ball with his heel – before firing inside the right post.

Donyell Malen scored for Dortmund in the 85th but Olmo sealed the result with Leipzig’s fourth a minute later. Nkunku set up the Spanish midfielder to score with a dipping shot in off the underside of the crossbar.

Third-placed Bayer Leverkusen defeated Hertha Berlin 2-1 to leave the visitors second from bottom on goal difference from Arminia Bielefeld, which came from behind to draw with Stuttgart 1-1.

It left the relegation scrap finely poised. Hertha, Bielefeld and Augsburg are all just one behind Stuttgart. Augsburg has played two games fewer than its relegation rivals.

American defender Chris Richards entered at the start of the second half, his first appearances for Hoffenheim since Jan. 22. The 22-year-old injured his right ankle during the United States’ World Cup qualifier at Canada on Jan. 30, a match on artificial turf.