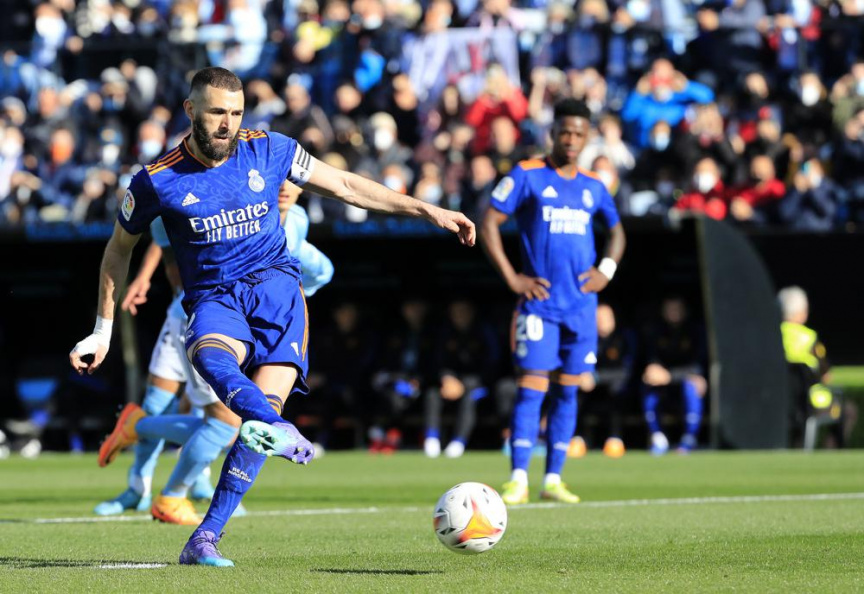 BARCELONA, Spain (AP) — With Karim Benzema back from injury, Real Madrid got back on the road to winning the Spanish league after the France striker scored two penalties in a 2-1 win at Celta Vigo on Saturday.

Benzema, who also had another spot kick saved in Vigo, missed Madrid’s 4-0 defeat to Barcelona before the two-week international break as he recovered from a left-leg injury.

Celta took the game to the league leaders, only to be undone by some rash defending in its area and some borderline calls by the referee. The third penalty that set up Benzema’s 70th-minute winner came after a questionable foul when Ferland Mendy stumbled over the leg of Kevin Vázquez. Celta also had a goal waived off in the first half after a video review.

“The first two were penalties, but the third was not,” Celta striker Iago Aspas said. “Mendy was going full steam and ran over our defender. I think it was a foul in our favor.”

Next up, Madrid visits London on Wednesday to start its Champions League quarterfinal with Chelsea.

Benzema’s brace took his tally to 34 goals across all competitions, his best scoring mark since he joined Madrid 13 seasons ago. His previous best was 32 in 2012. He has eight more league games and the remainder of the Champions League to add to his haul.

Benzema also equaled Alfredo Di Stéfano as Madrid’s third-highest scorer in the Spanish league with 216. He trails only Raúl González (228) and Cristiano Ronaldo (312).

Benzema put Madrid ahead in the 19th from the spot after Madrid defender Éder Militão was fouled by Nolito.

Despite falling behind early, Celta produced more scoring chances than the pacesetters, and it paid off in the 52nd when Aspas played the ball wide to Javi Galán, who squared the ball back into the heart of the area for the unmarked Nolito to beat Madrid goalkeeper Thibaut Courtois for 1-1.

After Celta’s Jeison Murillo tripped substitute Rodgyro in the box, Benzema’s spot kick in the 64th was saved by Dituro, who was wearing a baseball cap to keep out the glare from the setting sun.

“Winning today is important,” Courtois said. “Chelsea lost at home. It will be another great game. We have to make sure we play with intensity, which is something we sometimes are missing.”

Celta forward Santi Mina was used as a late substitute after he spent this week on trial for allegedly having raped a woman in 2017. He denies any wrongdoing. The verdict is expected in weeks.

Atlético’s sixth consecutive win moved it into third place level on points with Sevilla, which visits fourth-placed Barcelona on Sunday.

Félix opened with an 11th-minute header. After Gonzalo Escalante leveled for Alavés, Suárez fired in a spot kick in the 75th following Florian Lejeune’s foul of Matheus Cunha.

Félix finished off a shot by Cunha that he set up for his seventh goal in his last eight appearances. Suárez then rounded off the rout from a pass by Cunha.

José Morales scored twice to lead Levante’s 2-0 win over Villarreal and breathe some life into its bid to avoid relegation. Levante was left five points from safety.

Villarreal’s loss came before it hosts Bayern Munich in the first leg of their Champions League quarterfinal on Wednesday.

Javier Aguirre’s debut as Mallorca’s new coach ended with a 1-0 loss at Getafe after the host scored late.

Aguirre, a veteran coach with vast experience in Spain who has twice led the national team of his native Mexico, replaced Luis García Plaza. But the Balearic Island team suffered a seventh consecutive loss.