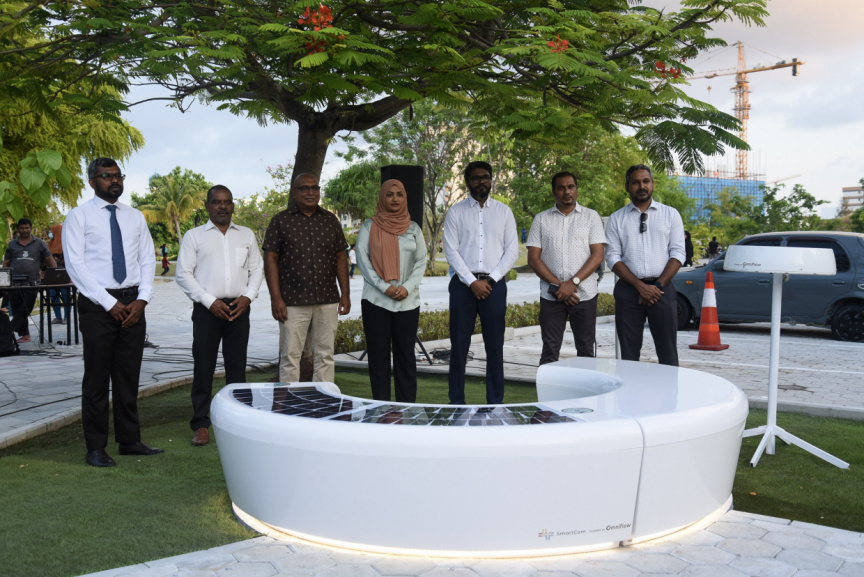 At a ceremony held at Central Park yesterday evening, the smart bench and smart pole were inaugurated by Transport Minister Aishath Nahula.

Established for the first time in the Maldives, the smart bench and smart pole were developed by Omniflow. The smart bench is equipped with architectural lighting, USB, and wireless charging points. It also boasts charging stations for electrical bicycles and wheelchairs.

Meawhile, the smart pole is illuminated by solar and wind energy. In addition to reducing fuel consumption of light posts by 90 percent – it is also equipped with WiFi and security cameras and will be able to display digital advertisements and public information.

Speaking at the ceremony, Minister Nahula described the establishment of the smart bench and smart pole as an important step forward in sustainable development for the Maldives.

“(I) believe this to be a beneficial service for the people in a country such as the Maldives that is seeing an increase in the use of renewable energy,” she added.

Noting that increasing the usage of renewable energy in the Maldives is a goal of the government – Minister Nahula stated that similar facilities will be developed across different parts of the country to achieve this goal.

HDC’S Managing Director Suhail Ahmed also spoke at the ceremony. He said that the smart pole and bench would utilize renewable energy and help to reduce the overall carbon emission of the city and would significantly aid in making urban cities more sustainable.

He also added that based on the usage statistics, more such facilities will be established in the future.

“In the future, such initiatives will be carried out in a more extensive manner in the future,” he had said.