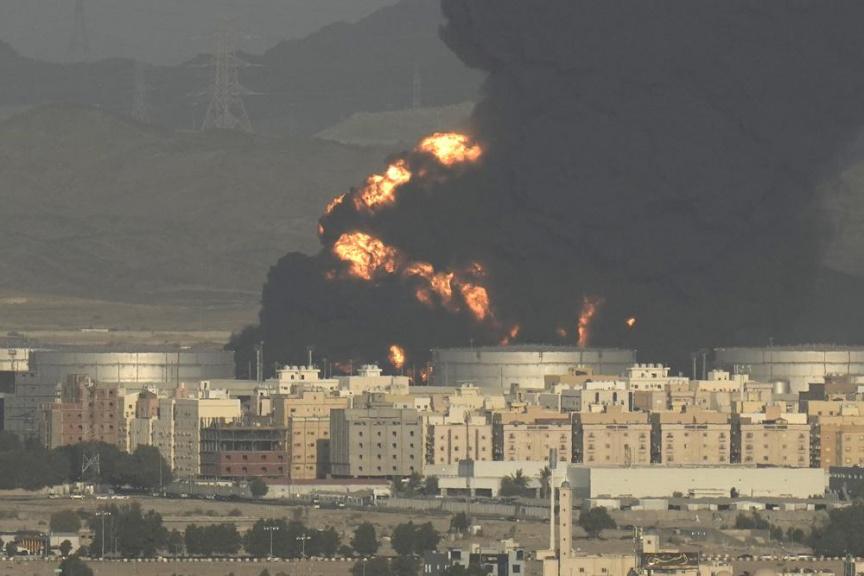 JIDDAH, Saudi Arabia (AP) — Yemen’s Houthi rebels attacked an oil depot on Friday in the Saudi city of Jiddah ahead of a Formula One race in the kingdom. It was the rebels’ highest-profile assault yet, though Saudi authorities pledged the upcoming grand prix would go on as scheduled.

The attack targeted the same fuel depot that the Houthis had attacked in recent days, the North Jiddah Bulk Plant that sits just southeast of the city’s international airport and is a crucial hub for Muslim pilgrims heading to Mecca. No injuries were reported in the attack.

The publicly traded Saudi Arabian Oil Co., known as Saudi Aramco, did not respond to a request for comment. Saudi authorities acknowledged a “hostile operation” by the Houthis targeting the depot with a missile.

In Yemen, Saudi Arabia leads a coalition battling the Iran-backed Houthis, who seized Yemen’s capital of Sanaa in September 2014. The kingdom, which entered the war in 2015, has been internationally criticized for its airstrikes that have killed scores of civilians — something the Houthis point to as they launch drones, missiles and mortars into the kingdom.

Brig. Gen. Turki al-Malki, a spokesman for the Saudi-led coalition, said the fire damaged two tanks and was put out without injuries.

“This hostile escalation targets oil facilities and aims to undermine energy security and the backbone of global economy,” al-Malki said, according to the state-run Saudi Press Agency. “These hostile attacks had no impact or repercussions in any way, shape or form on public life in Jiddah.”

The Saudi-led coalition warned overnight it would launch new attacks on Yemen, including on the hard-hit port city of Hodeida.

Jake Sullivan, White House national security adviser, condemned the attacks and called them “clearly enabled by Iran” despite an ongoing U.N. arms embargo. While Tehran denies arming the Houthis, U.N. experts and Western nations have linked weaponry in the rebels’ hands back to Iran.

In Tehran, authorities bathed its Azadi, or “Freedom,” Square in a light projection showing the faces of Houthi leaders.

“At a time when the parties should be focused on de-escalation and bringing needed life-saving relief to the Yemeni people ahead of the holy month of Ramadan, the Houthis continue their destructive behavior and reckless terrorist attacks striking civilian infrastructure,” U.S. Secretary of State Antony Blinken separately said in a statement.

British Prime Minister Boris Johnson condemned the Houthi attacks on Twitter. “These strikes put civilian lives at risk and must stop,” he wrote.

An Associated Press photojournalist covering practice laps at the F1 track in Jiddah saw the smoke rising in the distance to the east, just after 5:40 p.m. As the flames rose, the tops of the tanks of the bulk plant were clearly visible some 11.5 kilometers (7 miles) away.

Drivers raced on into the evening even as the fire burned. The fire smoldered into Saturday morning.

The second-ever Saudi Arabian Grand Prix in Jiddah is taking place on Sunday, though concerns had been raised by some over the recent attacks targeting the kingdom.

Hours later, the F1 said plans for Saturday’s third practice and qualifying and Sunday’s race were still set to go ahead. The Saudi Motorsport Co., which promotes the race, acknowledged the attack but said the “race weekend schedule will continue as planned.”

We “remain in direct contact with Saudi security authorities, as well as F1 and the FIA to ensure all necessary security and safety measures,” the company said, referring to motorsport’s governing body.

“The safety and security of all our guests continues to be our main priority.”

The al-Masirah satellite news channel run by Yemen’s Houthi rebels later claimed they had attacked an Aramco facility in Jiddah, along with other targets in Riyadh and elsewhere.

The North Jiddah Bulk Plant stores diesel, gasoline and jet fuel for use in Jiddah, the kingdom’s second-largest city. It accounts for over a quarter of all of Saudi Arabia’s supplies and also supplies fuel crucial to running a regional desalination plant.

The Houthis have twice targeted the North Jiddah plant with cruise missiles. One attack came in November 2020. The last came on Sunday as part of a wider barrage by the Houthis.

At the time of the 2020 attack, the targeted tank, which has a capacity of 500,000 barrels, held diesel fuel, according to a recent report by a U.N. panel of experts examining Yemen’s war. Repairing it after the last attack cost Aramco some $1.5 million.

The U.N. experts described the facility as a “civilian target,” which the Houthis should have avoided after the 2020 attack.

“While the facility also supplies the Saudi military with petroleum products, it is mostly supplying civilian customers,” the panel said. “If the plant had been out of service of a significant period, the impact on the kingdom’s economy as well as on the welfare of the residents of the Western region would likely have been significant.”

Cruise missiles and drones remain difficult to defend against, though the U.S. recently sent a significant number of Patriot anti-missile interceptors to Saudi Arabia to resupply the kingdom amid the Houthi attacks.

In September, the AP reported that the U.S. had removed its own Patriot and THAAD defense systems from Prince Sultan Air Base outside of Riyadh.

The attacks have renewed questions about the kingdom’s ability to defend itself from Houthi fire as a yearslong war in the Arab world’s poorest country rages on with no end in sight. It also comes as Saudi Arabia issued an unusually stark warning that it is unable to guarantee its oil production won’t be affected by further attacks — which could push global energy prices even higher amid Russia’s war on Ukraine.