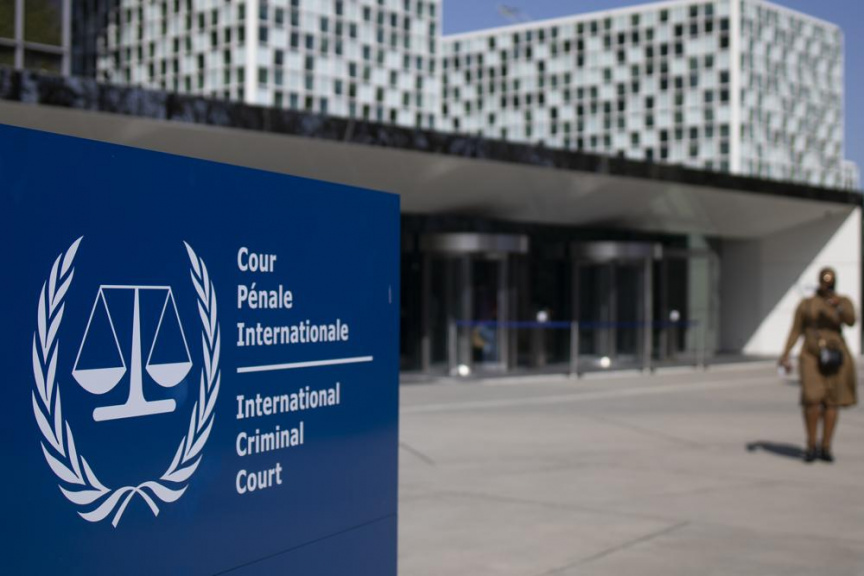 FILE - A view of the exterior view of the International Criminal Court in The Hague, Netherlands, Wednesday, March 31, 2021. (AP Photo/Peter Dejong, File)

THE HAGUE, Netherlands (AP) — Dozens of nations met Thursday to pledge their support to the International Criminal Court’s investigation in Ukraine, offering money, technology and expertise to the probe opened soon after Russia’s invasion began a month ago.

At a meeting of representatives from 38 nations in The Hague, the court’s chief prosecutor urged them to stand up in support of the global legal order.

“If we don’t put our money where our collective mouths are, if we don’t give actual support but we wring our hands with lamentations, things can get worse,” Prosecutor Karim Khan told a meeting of representatives from more than 20 nations at the British ambassador’s residence in The Hague. “And history will not judge us well; victims throughout the world will not judge us well.”

Britain said before the meeting that it was boosting its support for the ICC’s Ukraine probe with extra funds and specialist staff.

France, already the third-largest contributor to the ICC budget, announced it will provide magistrates, investigators and experts and 500,000 euros ($550,000) in extra funding, which may be increased if needed.

British Deputy Prime Minister Dominic Raab said the meeting was important to show support to a prosecution office that has often in the past been stretched financially and to send a message to Russia.

“We had Karim Khan here and he will walk away with a whole load of additional financial and technical support,” Raab said.

“Crucially, though, the message that comes out not just from the UK, not just from the ICC, but from those 38 countries, is that we will not stand for impunity in Ukraine,” he added. “And those leaders, whether it’s in Moscow or commanders on the ground in Ukraine, will be held to account if they commit war crimes, and that is a deterrent message which is important to send right now.”

The meeting came a day after U.S. Secretary of State Antony Blinken said the Biden administration has made a formal determination that Russian troops have committed war crimes in Ukraine and would work with others to prosecute offenders.

The U.S. is not a member state of the ICC, but could still assist a prosecution there by helping to gather evidence against Russian forces in Ukraine, using some of the vast abilities it has deployed to track and monitor what has been happening in the conflict.

The U.S. could also provide support and backing to a commission of inquiry established by the U.N. Human Rights Council.

“All of those concerned about the situation in Ukraine, whether a state party or not, can support what is going on,” Raab said, adding that it will be up to the U.S. “to decide what they do. But I’m sure they are equally horrified at the evidence in the pictures and the humanitarian suffering that we’re all seeing on our TV screens.”

The meeting in The Hague happened as Biden and other NATO leaders gathered in Brussels on the one-month anniversary of the Russian invasion.

The U.K. is a member of the court and Raab said London will donate 1 million pounds ($1.3 million) in extra funding for the ICC and assign soldiers with expertise in intelligence gathering to the court to help uncover evidence of war crimes. A war crimes team in the Metropolitan Police’s Counter Terrorism Command also is being mobilized to help the investigation.

Khan, opened an investigation earlier this month after dozens of the ICC’s member states formally asked him to launch a probe. Khan has already visited Ukraine as part of the investigation and sent his staff to the region to begin gathering evidence.

Neither Russia nor Ukraine is a member of the court, but Ukraine has accepted its jurisdiction.

Following another meeting Thursday in The Hague, European Union judicial cooperation agency Eurojust said it would help coordinate investigations of crimes in Ukraine, working closely with the ICC.

“The desire to make sure justice prevails transcends national and continental borders,” Eurojust President Ladislav Hamran said. He said Eurojust would act “as a bridge between the investigations of EU Member States and the independent and impartial investigation of the ICC.”

He said his agency will also support a multinational joint investigation team being set up to look into crimes in Ukraine.

Despite Western arms, Ukraine is outgunned in the east