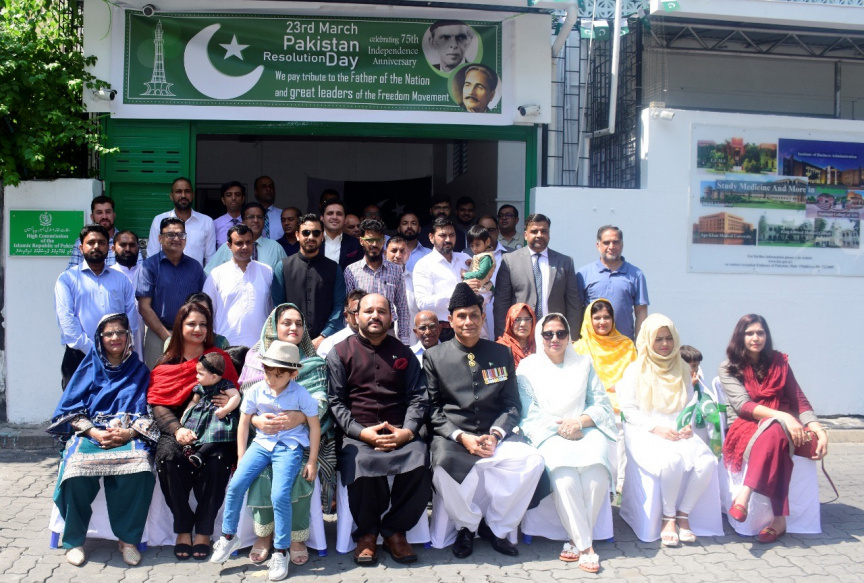 The Pakistan flag was hoisted to the country’s national anthem by Pakistan High Commissioner Vice Admiral (Retired) Ather Mukhtar in a ceremony held at the premises of the High Commission on Wednesday morning.

The ceremony was attended by a large number of Pakistanis residing in Maldives, as well as members of the Maldivian community.

Welcoming the attendees, Deputy High Commissioner Zulqurnain Ahmad extended heartfelt felicitations to Pakistanis in Maldives on occasion of Pakistan Day, and thanked the Maldivians who attended the ceremony.

Zulqurnain noted that this year’s Pakistan Day comes as the country celebrates its 75th independence anniversary.

He said that as Pakistan celebrates its independence, the people of Pakistan cannot forget the plight of their Kashmiri brethren, who have been striving for their legitimate right to self-determination for over 73 years.

“We, Pakistanis will always be with Kashmir brothers and sisters till the attainment of the right to                     self-determination in accordance with UNSC Resolutions and as per aspiration of Kashmiri people,” he said.

After delivering the welcome remarks, Zulqurnain read messages from the President and Prime Minister of Pakistan on occasion of Pakistan Day.

High Commissioner Mukthar, in his speech, paid tribute to Quaid-e-Azam Muhammad Ali Jinnah, known as the Father of the Nation of Pakistan, and leaders of the independence movement, who united Muslims of British India and struggled for creation of a free and independent Muslim state.

“The struggle culminated in the emergence of Pakistan on the map of the world on August 14, 1947. This day is, therefore, a day of reaffirmation of the ideals of Pakistan on which the foundations of the state were laid by the founder of Pakistan Quaid-e-Azam Muhammad Ali Jinnah.

Mukhtar also highlighted on the 48th session of Organization of Islamic Cooperation (OIC)’s Council of Foreign Ministers currently in progress in Islamabad.

He said that Pakistan was honored to host the session, and that the convening of the foreign ministers of Islamic states on the anniversary of Pakistan’s independence was an extraordinary display of Muslim solidarity with Pakistan.

Mukthar said that as the world’s second-largest intergovernmental organization, and as one that represents the collective voice of the Islamic world, OIC, as a force for peace and justice, must continue to support the just causes of Palestinians and Kashmiris for self-determination and liberation from foreign occupation.

“For overseas Pakistanis, the Roshan Digital Account; Online Attestations of various documents including of the power of attorney; online renewal of the Passports; establishment of Prime Minister Citizenship Portal; right of vote to the overseas Pakistanis are some of the excellent initiatives of the government of Pakistan,” he said. “Despite COVID-19 challenges, the Pakistan’s economy is now on the right track with government’s concrete steps, and its fruits will reach to the gross root level soon.”

He said that Maldives and Pakistan enjoyed cordial relations, based on common faith, culture, historic links, trust and mutual respect.

He said that Pakistan has been working with Maldives in the areas of education, health, sports, capacity building and social sector.

He extended best wishes for continued progress and development of Maldives.

Sheikh Abdul Azeez Hussain, an Islamic scholar and lecturer at the Islamic University of Maldives IUM), also spoke at the ceremony.

Azeez, in his speech, extended warmest greetings to the people of Pakistan, and highlighted on the strong ties between people of Maldives and Pakistan.

Pakistan HC: 48th OIC-CFM will be a landmark session

Police orders to not hold ‘India Out’ protest in Male'