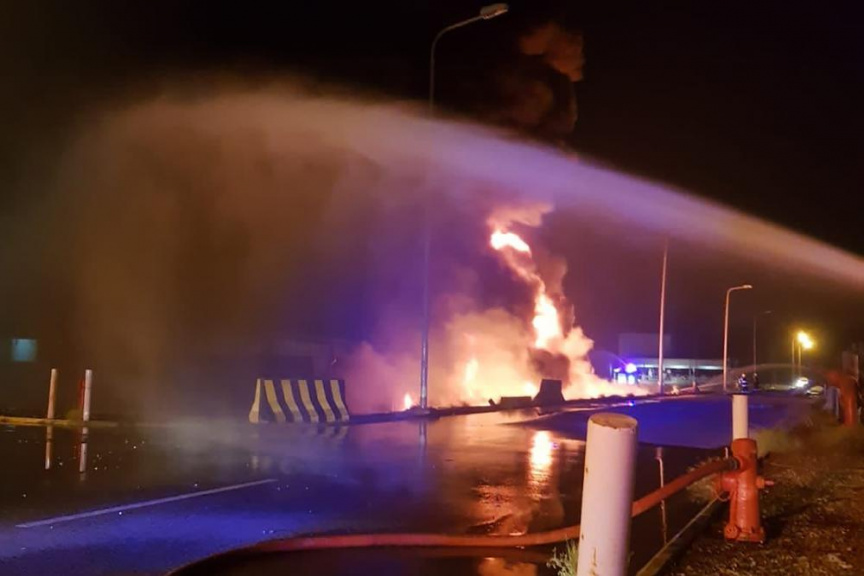 DUBAI, United Arab Emirates (AP) — Yemen’s Houthi rebels unleashed one of their most intense barrages of drone and missile strikes on Saudi Arabia’s critical energy facilities on Sunday, sparking a fire at one site and temporarily cutting oil production at another.

The salvo marked a serious escalation of rebel attacks on the kingdom as the war in Yemen rages into its eighth year and peace talks stall.

The attacks did not cause casualties, the Saudi-led military coalition fighting in Yemen said, but struck sites belonging to one of the world’s most important energy companies and damaged civilian vehicles and homes. The coalition also said it destroyed a remotely piloted boat packed with explosives dispatched by the Houthis in the busy southern Red Sea.

The disruption, as oil prices spike in an already-tight energy market, “will be compensated for from the inventory,” the ministry said, without elaborating.

Another aerial attack later in the day struck a fuel tank at an Aramco distribution station in the port city of Jiddah and ignited a fire. Later at night, the roar and thump of missile interceptors rattled the port city as the Saudi military coalition said it destroyed more projectiles over Jiddah. Residents posted footage on social media showing streaks of light from missile defences pierce the dark sky.

The relentless wave of strikes revealed the expanding reach and precision of the rebels and the persistent gaps in the kingdom’s air defences. A sophisticated strike in 2019 on Aramco oil facilities knocked out half the kingdom's oil production and threatened to ignite a regional crisis — an attack that the U.S. and Riyadh later alleged came from Iran.

The attacks on Sunday came as Saudi Arabia’s state-backed Aramco, the world’s largest oil company, announced its profits surged 124% in 2021 to $110 billion, a jump fueled by renewed anxieties about global supply shortages and soaring oil prices.

The international oil benchmark Brent crude spiked over $107 on Sunday after nearly hitting a peak of $140 earlier this month. Saudi Arabia and the United Arab Emirates have so far resisted Western appeals to increase oil production to offset the loss of Russian oil as gasoline prices skyrocket.

Yehia Sarie, a spokesman for Yemen’s Iran-backed Houthis, said the rebels had launched “a wide and large military operation” in retaliation for the Saudi-led “aggression and blockade” that has turned much of Yemen into a wasteland.

The escalation followed a flurry of diplomacy over the weekend in Oman’s capital of Muscat. The U.N. special envoy for Yemen, Hans Grundberg, met with the chief Houthi negotiator and Omani officials to discuss “a possible truce during the holy month of Ramadan” in early April, the U.N. mission said.

The White House condemned the attacks, blaming Iran for supplying the Houthis with missile and drone parts, as well as training and expertise.

“It is time to bring this war to a close, but that can only happen if the Houthis agree to cooperate with the United Nations,” said U.S. National Security Advisor Jake Sullivan. “The United States stands fully behind those efforts.”

The Saudi-led military coalition reported aerial strikes on a range of facilities: an Aramco liquified gas plant in the Red Sea port of Yanbu, an oil storage plant in Jiddah, a desalination facility in Al-Shaqeeq on the Red Sea coast and an Aramco oil facility in the southern border town of Jizan, among others.

The extent of damage on Saudi infrastructure remained unclear, and the ministry said only the Yanbu refinery saw a temporary drop in output. A joint venture between Aramco and China, the $10 billion Yanbu Aramco Sinopec Refining Company on the Red Sea pumps 400,000 barrels of oil a day.

The Saudi Press Agency shared photos of firetrucks dousing leaping flames with water and a trail of rubble wrought by shrapnel that crashed through ceilings and pocked apartment walls. Other images showed wrecked cars and giant craters in the ground.

The barrage comes days after the Saudi-based Gulf Cooperation Council invited Yemen’s warring sides for peace talks in Riyadh — an offer dismissed out of hand by the Houthis, who demanded that negotiations take place in a “neutral” country.

Negotiations have floundered since the Houthis have tried to capture oil-rich Marib, one of the last remaining strongholds of the Saudi-backed Yemeni government in the country’s north.

Yemen’s brutal war erupted in 2014 after the Iran-backed Houthis seized the country’s capital, Sanaa. Saudi Arabia and its allies launched a devastating air campaign to dislodge the Houthis and restore the internationally recognized government.

But years later, the war has settled into a bloody stalemate and created one of the worst humanitarian crises in the world.

Repeated Houthi cross-border attacks have rattled world energy markets and raised the risk of disruptions to output at Aramco sites.

As part of its 2021 report, Aramco said it stuck to its promise of paying quarterly dividends of $18.75 billion — $75 billion last year — due to commitments the company made to shareholders in the run-up to its initial public offering. Nearly all of the dividend money goes to the Saudi government.

Riding on its 2021 income surge, Aramco said it expects to raise its capital expenditure to between $40 and $50 billion this year to meet growing energy demand, a sizable increase from last year’s spending of $31.9 billion.