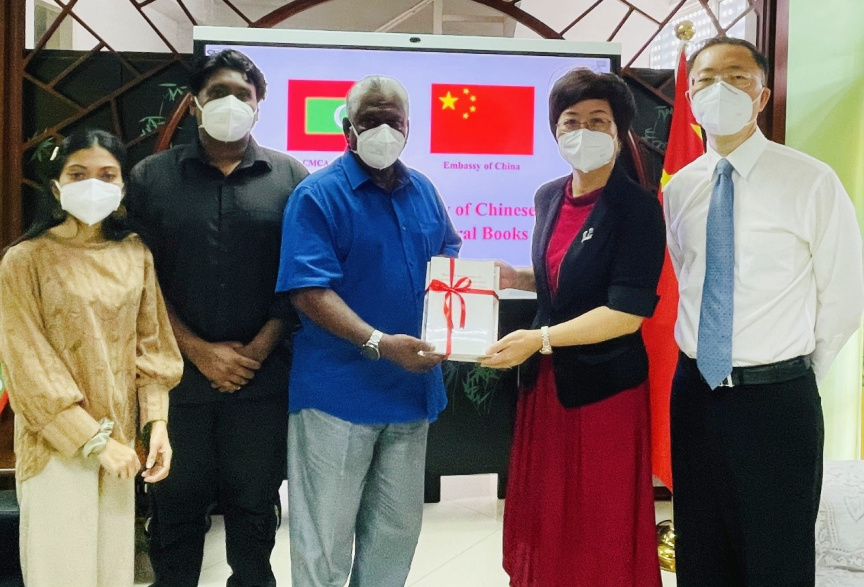 The books were handed over at a special ceremony held yesterday, by Ambassador of China to Maldives Wang Lixin. CMCA’s Vice President Ali Waheed and MCTCO’s President Midhuam Saeed received the books on behalf of their respective organizations.

Speaking at the ceremony, Ambassador Wang expressed her gratitude towards CMCA and MCTCO for their enduring efforts in promoting mutual understanding and friendship between the people of China and Maldives.

Noting this year marks the important milestone of the 50th year since the establishment of China-Maldives relations, Ambassador Wang underscored that the bilateral relations would embrace good opportunities and a promising future.

On this note, she pointed out that the successful visit by China’s Foreign Minister, State Councilor Wang Yi earlier this year unveiled the prelude to the series of commemorative events and ushered in a new chapter of China-Maldives relations.

She expressed hope that CMCA and MCTCO would actively participate in the commemorative events and further step up their role in advancing bilateral relations.

Ambassador Wang also added that she hoped the books which were donated aid local people in understanding Chinese history, culture and the development of contemporary China better.

Following her remarks, CMCA’s Vice President and MCTCO’s President thanked the Embassy for their generous donation. They also briefed Ambassador Wang on their efforts in promoting the people-to-people exchanges and friendship between China and Maldives in recent years.

Both individuals spoke highly of the sound development of China-Maldives relations and reassured their commitment to further promote the mutual understanding between the people of the two countries.

They also extended congratulations on the fruitful achievements of China-Maldives relations over the past 50 years and expressed readiness to actively participate in and support the commemorative events.

CMCA and MCTCO, since establishment, have made great contributions to the promotion of people-to-people friendly exchanges between China and Maldives – that has significantly aided in further strengthening bilateral relations.

Parliament session concludes less than an hour into it