Turkey, Armenia agree to press ahead with mending fences 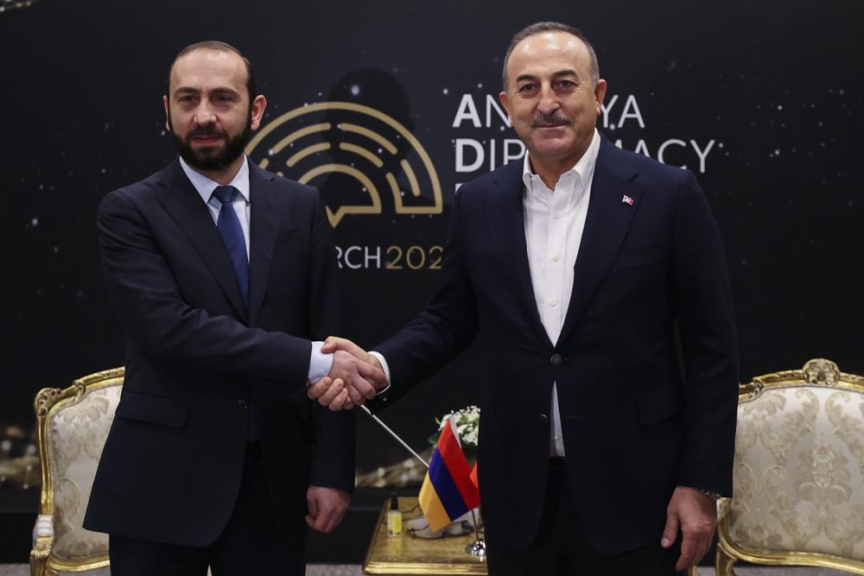 ANTALYA, Turkey (AP) — Turkey and Armenia have agreed to press ahead with efforts to establish diplomatic relations “without conditions” and continue the normalization efforts that could lead to the reopening of their shared borders for trade, their foreign ministers said Saturday.

Ararat Mirzoyan met with his Turkish counterpart Mevlut Cavusoglu, on the sidelines of a diplomacy forum near the Turkish Mediterranean city of Antalya during a rare visit to Turkey.

Mirzoyan said he welcomed Turkey’s invitation to the forum “as a positive signal” for improved relations between the two countries that have had decades of bitterness and have no diplomatic ties.

“I can say that it was a very productive and constructive meeting,” Cavusoglu said.

Turkey, a close ally of Azerbaijan, shut down its border with Armenia in 1993 in a show of solidarity with Baku, which was locked in a conflict with Armenia over the Nagorno-Karabakh region.

In 2020, Turkey strongly backed Azerbaijan in the six-week conflict with Armenia over Nagorno-Karabakh, which ended with a Russia-brokered peace deal that saw Azerbaijan gain control of a significant part of the region.

Turkey and Armenia also have a more than century-old hostility over the deaths of an estimated 1.5 million Armenians in massacres, deportations and forced marches that began in 1915 in Ottoman Turkey.

The two countries have appointed special representatives who have so far held two rounds of talks in Moscow and Vienna to improve ties.

It is their second attempt at reconciliation. Turkey and Armenia reached an agreement in 2009 to establish formal relations and to open their border, but the agreement was never ratified because of strong opposition from Azerbaijan.

This time around, however, Azerbaijan has given the nod for the reconciliation efforts. Cavusoglu has said that Ankara would “coordinate” the normalization process with Azerbaijan.

Cavusoglu told reporters in Antalya: “Azerbaijan is also pleased with the steps that are being taken and the normalization process between Turkey and Armenia.”

As a first step toward reconciliation, charter flights between Yerevan and Istanbul resumed earlier this year.