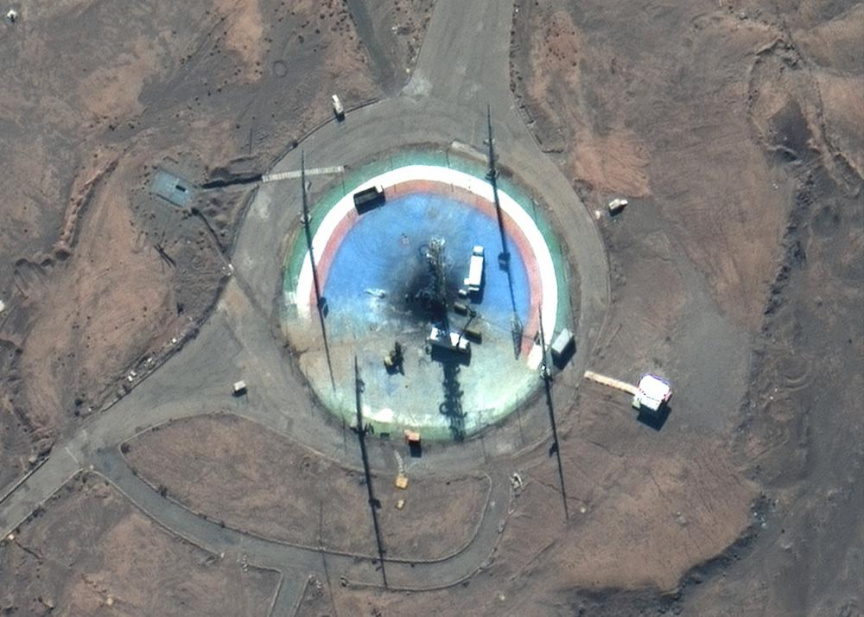 DUBAI, United Arab Emirates (AP) — Iran likely suffered another failed launch of a satellite-carrying rocket while attempting to reinvigorate a program criticized by the West, even as Tehran faces last-minute negotiations with world powers to save its tattered nuclear deal in Vienna.

Satellite images from Maxar Technologies seen by The Associated Press show scorch marks at a launch pad at Imam Khomeini Spaceport in Iran’s rural Semnan province on Sunday. A rocket stand on the pad appears scorched and damaged, with vehicles surrounding it. An object, possibly part of the gantry, sits near it.

Successful launches typically don’t damage rocket gantries because they are lowered prior to takeoff. Iran also usually immediately trumpets launches that reach space on its state-run television channels, and it has a history of not acknowledging failed attempts.

Separate images from Planet Labs PBC suggest the attempted launch likely occurred sometime after Friday. Iran’s mission to the United Nations did not respond to a request for comment.

The U.S. military’s Space Command did not detect a launch over the weekend, said Army Lt. Col. César Santiago, a Pentagon spokesperson. That suggests the rocket never left the launch pad.

The rocket involved appears to have been Iran’s Zuljanah satellite launch vehicle, said Jeffrey Lewis, an expert at the James Martin Center for Nonproliferation Studies at the Middlebury Institute of International Studies who first noticed the attempted launch with colleagues.

The gantry apparently damaged resembled another that was previously used in a successful launch last year of a Zuljanah, named after a horse of Imam Hussein, a grandson of the Prophet Muhammad and a key figure in the Shiite faith who was massacred with his fighters at Karbala in the 7th century.

It remains unclear what could have caused the blast. The first two stages of a Zuljanah are solid fuel, but its final stage is liquid and would have needed to be fueled on the launch pad, Lewis said.

Over the past decade, Iran has sent several short-lived satellites into orbit and in 2013 launched a monkey into space. The program has seen recent troubles, however. There have been five failed launches in a row for the Simorgh program, another satellite-carrying rocket. A separate fire at the Imam Khomeini Spaceport in February 2019 also killed three researchers, authorities said at the time.

The launch pad used in the latest launch remains scarred from an explosion in August 2019 that even drew the attention of then-President Donald Trump. He later tweeted what appeared to be a classified surveillance image of the launch failure.

The successive failures raised suspicion of outside interference in Iran’s program, something Trump himself hinted at by tweeting at the time that the U.S. “was not involved in the catastrophic accident.” There’s been no evidence offered, however, to show foul play in any of the failures, and space launches remain challenging even for the world’s most-successful programs.

Meanwhile, Iran’s paramilitary Revolutionary Guard in April 2020 revealed its own secret space program by successfully launching a satellite into orbit. The head of the U.S. Space Command later dismissed the satellite as “a tumbling webcam in space” that wouldn’t provide Iran vital intelligence — though it showed Tehran’s ability to successfully get into orbit.

This launch, however, comes as Western diplomats warn time is ticking down to restore Iran’s nuclear deal with world powers, which saw Tehran drastically limit its enrichment of uranium in exchange for the lifting of economic sanctions. Trump unilaterally withdrew from the deal in 2018, setting the stage for years of tensions and mysterious attacks across the wider Mideast.

President Joe Biden, however, did not mention Iran in his State of the Union speech that largely focused on the Russian war on Ukraine.

The U.S. has alleged Iran’s satellite launches defy a U.N. Security Council resolution and has called on Tehran to undertake no activity related to ballistic missiles capable of delivering nuclear weapons.

Iran, which long has said it does not seek nuclear weapons, previously maintained that its satellite launches and rocket tests do not have a military component. U.S. intelligence agencies and the International Atomic Energy Agency say Iran abandoned an organized military nuclear program in 2003.

Today, Tehran enriches uranium up to 60% purity — a short technical step from weapons-grade levels of 90% and far greater than the nuclear deal’s 3.67% cap. Its stockpile of enriched uranium also continues to grow and international inspectors face challenges in monitoring its advances.

While Iran’s former President Hassan Rouhani dialed back the country’s space program for fears of alienating the West, new hard-line President Ebrahim Raisi has instead focused on jumpstarting the program. Iran has a series of satellites it plans to launch and Iran’s Supreme Council of Space recently met for the first time in 11 years.

Iran launche rocket to space as nuclear talks to resume