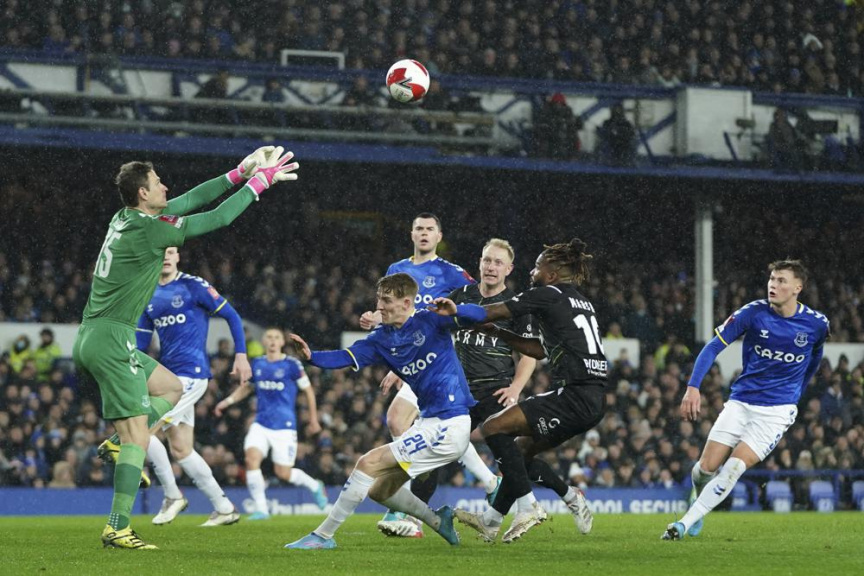 Boreham Wood had not conceded a goal in the competition this season until Rondon finally created the breakthrough for Everton in the 57th minute after meeting a cross at the near post.

Everton striker Richarlison had a goal ruled out by VAR before Rondon added the second with a powerful header that goalkeeper Taye Ashby-Hammond could not prevent from crossing the line.

Everton will play away at Crystal Palace for a place in the semifinals.

The Premier League club had paid for a special one-off kit for Boreham Wood to avoid a colour clash and also paid for the visitors’ travel and overnight stay.

It looked like that generosity would be extended to the pitch as well as Everton rarely threatened during a poor first half, watched for the first time by Everton’s new director of football Kevin Thelwell.

Ukraine international Vitalii Mykolenko was made Everton captain for the night and there was a poignant pre-match show of solidarity with his homeland as players and officials held a banner reading “Imagine all the people, sharing all the world” — a line from John Lennon’s “Imagine” which was played over the ground’s public address system.

The poor first-half display persuaded manager Frank Lampard to make a halftime change and bring on Richarlison for Nathan Patterson to spark the attack.

Rondon missed his first good chance to score when he met Jonjoe Kenny’s cross but headed over.

Jarrad Branthwaite then gifted the visitors a chance when he passed straight to Tyrone Marsh and was relieved to see the Boreham Wood forward drive a shot just over goalkeeper Asmir Begovic.

The growing frustration subsided when Rondon made amends for his earlier miss with a neatly-taken goal after nipping in front of center-back David Stephens to convert another Kenny cross.

Richarlison’s close-range effort was then chalked off for handball after Adrian Clifton’s attempted headed clearance hit the Brazil international.

But Rondon ensured there was no late drama with a header which was adjudged to have crossed the line before Ashby-Hammond pulled it back.

Boreham Wood had knocked out Championship side Bournemouth in the previous round but manager Luke Garrard acknowledged that his team was overpowered in the second half.

“I am just gutted we haven’t been able to give our fans a moment -- they were colossal all evening and it was a shame we didn’t test Asmir (Begovic) in goal enough, but what we have achieved in this cup run has been fantastic,” Garrard said. “They (Everton) went up several gears in the second half when they brought on Richarlison, with the way he and Rondon work together, and (Anthony) Gordon is unbelievable, frightening. I’m glad we didn’t open up too much as they could have had three or four.

“The boys thoroughly deserve a few beers with the extended staff as this has been a team effort.”

The draw for the quarterfinals also handed Manchester City a trip to Southampton, while Chelsea will visit Middlesbrough.

The last round-of-16 game between Nottingham Forest and Huddersfield will be played Monday, with the winner facing Liverpool.