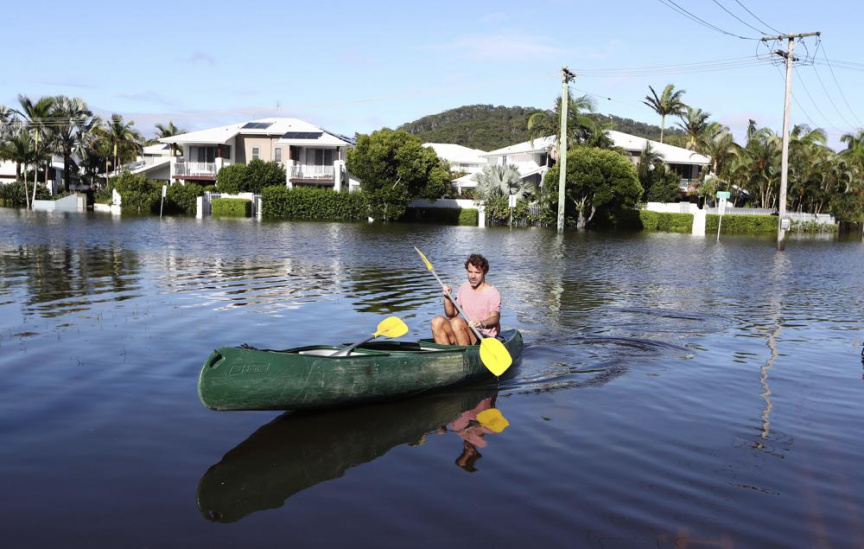 A man paddles a canoe through flood water in Cabarita, Australia, Tuesday, March 1, 2022. Tens of thousands of people had been ordered to evacuate their homes by Tuesday and many more had been told to prepare to flee as parts of Australia's southeast coast are inundated by the worst flooding in decades. (Jason O'Brien/AAP Image via AP)

CANBERRA, Australia (AP) — Tens of thousands of people had been ordered to evacuate their homes by Tuesday and many more had been told to prepare to flee as parts of Australia’s southeast coast are inundated by the worst flooding in decades.

Scores of residents, some with pets, spent hours trapped on their roofs in recent days by a fast-rising river in the town of Lismore in northern New South Wales state, and dozens of cars were trapped on a bridge in the nearby town of Woodburn over Monday night with both the bridge’s approaches submerged.

Up to 50 people were rescued from the bridge early Tuesday, officials said.

“We had no capabilities to get them off in the dark so we just had to make sure that they bunkered down and we went in this morning and got them all out,” Woodburn State Emergency Services Commander Ashley Slapp told Australian Broadcasting Corp.

The floodwaters are moving south into New South Wales from Queensland state in the worst disaster in the region since what was described as a once-in-a-century event in 2011.

New South Wales Premier Dominic Perrottet said there had been 1,000 rescues in his state by Tuesday and more than 6,000 calls for authorities to help.

Perrottet said 40,000 people had been ordered to evacuate, while 300,000 others had been placed under evacuation warnings.

“We’ll be doing everything ... we can to get everybody to safety and get these communities right across our state back on their feet as quickly as possible,” Perrottet told reporters in Sydney.

The death toll from the latest disaster remained at eight with all the fatalities in Queensland. The latest fatality was a man who was trapped in a car in floodwater on Monday at Gold Coast city.

Queensland Police Commissioner Katarina Carroll said emergency services held grave concerns for a man aged in his 70s who fell from his moored yacht in the state capital Brisbane into a swollen river on Saturday and for a 76-year-old man who disappeared with his vehicle in floodwater northwest of Brisbane on Sunday.

The extraordinary rainfall comes as the United Nation's Intergovernmental Panel on Climate Change reported this week that vast swathes of Australia have already lost 20% of its rainfall and the country’s fire risk has gone beyond worst-case scenarios developed just a few years ago.

Australia’s hottest and driest year on record was 2019 which ended with devastating wildfires across southeast Australia. The fires directly killed 33 people and another 400 people were killed by the smoke.

But two La Nina weather patterns have since brought above-average rainfall to the same regions.

Albanese sworn in as PM in Australia

Most Barrier Reef coral studied this year was bleached

Many evacuate in worst Australian floods in a decade