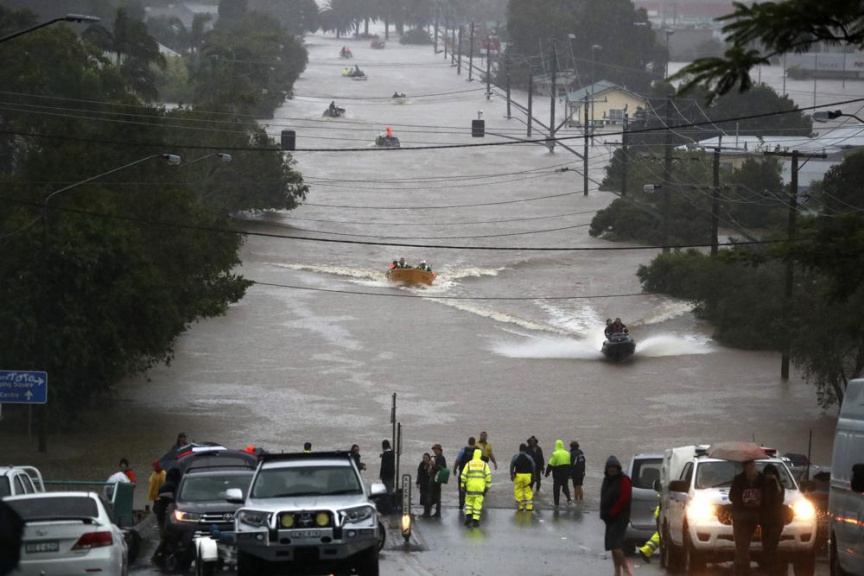 People use small boats to travel through flood water in Lismore, Australia, Monday, Feb. 28, 2022. Heavy rain is bringing record flooding to some east coast areas and claimed seven lives while the flooding in Brisbane, a population of 2.6 million, and its surrounds is the worst since 2011 when the city was inundated by what was described as a once-in-a-century event. (Jason O'Brien/AAP Image via AP)

The flooding in Brisbane and its surroundings is the worst since 2011 when the city of 2.6 million people was inundated by what was described as a once-in-a-century event.

A 59-year-old man drowned in Brisbane’s north on Sunday afternoon after he tried to cross a flooded creek on foot and was pinned against a fence, Queensland state police said on Monday.

Residents were advised to shelter where they were unless it is unsafe to do so. Access to many areas was cut in multiple places, Queensland Fire and Emergency Services said in an alert.

Emergency crews made more than 100 swift-water rescues after receiving 8,000 calls for help in Brisbane and its surrounds since midafternoon Sunday, officials said.

All seven flood deaths have been in Queensland state, of which Brisbane is the capital. A search continues for a solo sailor, aged in his 70s, who fell overboard from his vessel in the Brisbane River near the city centre on Saturday.

Multiple emergency flood alerts were in place for Brisbane suburbs, where 2,145 homes and 2,356 businesses were submerged or would become so Monday as the waters rose. Another 10,827 properties will be partially flooded above the floorboards.

Brisbane Lord Mayor Adrian Schrinner said the floods are “very different” to 2011 because the rain pummeled the region for five days. In 2011, the rain had stopped days before the Brisbane River peaked and authorities had warned for several days of flooding downstream.

Queensland Transport Minister Mark Bailey said major roads had been cut. Train and ferry services across Brisbane have been halted, he said.

“We’re going to have localized flooding in a lot of areas for a couple of days yet,” Bailey said.

South of the Queensland border, the New South Wales town of Lismore was bracing for its worst flooding on record.

Downtown Lismore was inundated on Monday after days of unrelenting rain and 15,000 people had been evacuated, officials said.