India sends wheat to Afghanistan after deal with Pakistan 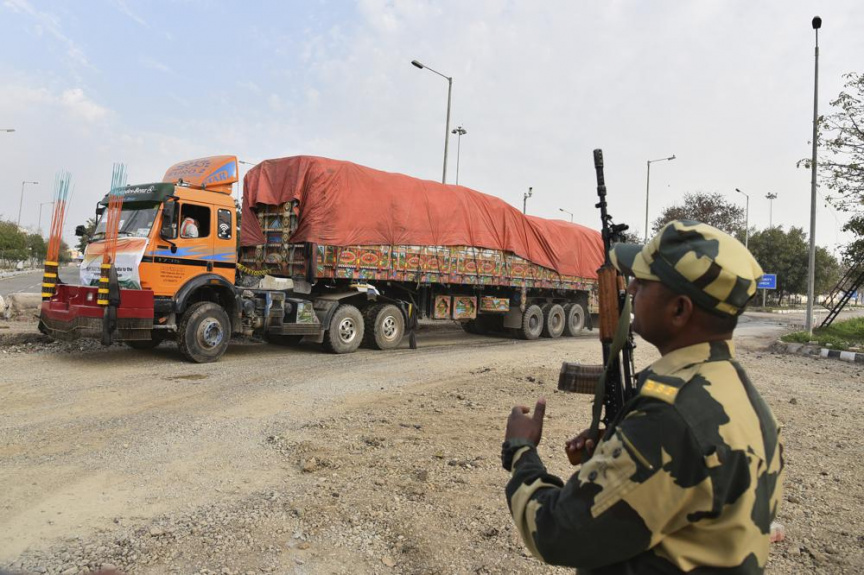 An Indian Border Security Force soldier guards as a truck carrying wheat from India moves to pass through the Attari-Wagah border between India and Pakistan, near Amritsar, India, Tuesday, Feb. 22, 2022. (AP Photo/Prabhjot Gill)

NEW DELHI (AP) — Indian authorities have sent tons of wheat to Afghanistan to help relieve desperate food shortages, after they struck a deal with neighboring rival Pakistan to allow the shipments across the shared border.

Some 50 trucks stacked to the brim with around 2,500 tons of wheat donated by India began crossing into Pakistan on Tuesday, according to a statement by India’s foreign ministry.

“I thank the Indian government for the generosity displayed at a time when more than 20 million Afghans are facing crisis or the worse levels of food insecurity in more than 3 decades,” tweeted Farid Mamundzay, Afghanistan’s ambassador to India.

Last week, Pakistani officials said the country would allow India — with which it shares a heavily militarized border — to deliver wheat to Afghanistan, where millions are facing dangerous food shortages.

Under a deal with New Delhi, Pakistan allowed trucks from Afghanistan to collect wheat from India by way of the frontier crossing at Attari-Wagah. The trucks will then head for Afghanistan’s city of Jalalabad via Pakistan’s Torkham border, foreign ministry officials there said last week.

The decision from Pakistan came more than three months after India said it would deliver 50,000 metric tons of wheat and life-saving medicine to Afghanistan, whose economy is teetering on the brink of collapse in the wake of the Taliban takeover in August.

Pakistan in recent months has also sent food and medicine to Afghanistan.

India and Pakistan have a history of bitter relations driven by their dispute over the province of Kashmir, which is divided between the two countries but claimed by both in its entirety.

Pakistan suspended trade with India in 2019 after New Delhi stripped the Indian-controlled section of Kashmir of its statehood and special constitutional status. Since then, normal diplomatic and trade ties between them have not resumed.

Like the rest of the world, Pakistan and India have so far not recognized the Taliban government.

New Delhi has no diplomatic presence in Kabul after evacuating its staff ahead of the U.S. withdrawal from Afghanistan in August. It did, however, meet with a Taliban representative in Qatar on Aug. 31.

Before the Taliban took Kabul, India provided Afghan security forces with operational training and military equipment, even though it had no troops on the ground.

The U.N. has warned that millions are on the brink of starvation in Afghanistan, with over half the population staring at extreme hunger.