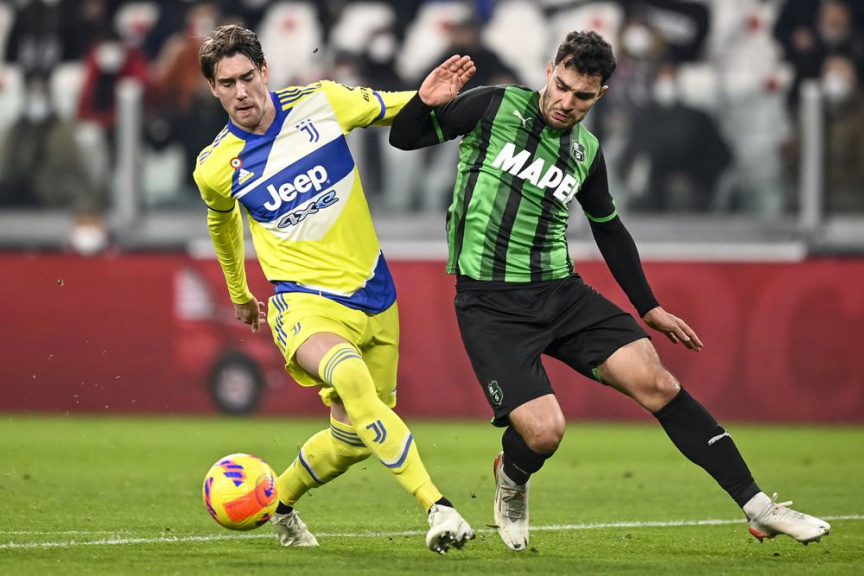 Juventus' Dusan Vlahovic, left, and Sassuolo's Kaan Ayhan battle for the ball during the Italian Coppa Italia soccer match between Juventus and Sassuolo at the Allianz Stadium in Torino, Italy, Thursday, Feb. 10, 2022. (Fabio Ferrari/LaPresse via AP)

The former Fiorentina striker did well to go past Mert Müldür and was fortunate his shot took a decisive deflection from Brazilian defender Ruan to finally beat the excellent Sassuolo goalkeeper Gianluca Pegolo in the 88th minute.

The 40-year-old Pegolo had produced several outstanding saves to keep the visitors in the game, particularly in the second half.

Paulo Dybala got Juve off to a great start in the third minute, when he converted the rebound after Weston McKennie’s initial effort was blocked by a defender.

But the visitors rallied and thoroughly deserved Hamed Traorè’s equalizer when it came in the 24th. The Ivorian midfielder played a one-two with Gianluca Scamacca to go past a defender and then let fly with a curling shot inside the far post despite facing three more.

It finally forced a reaction from Juve. Pegolo saved from both McKennie and Vlahović to keep Sassuolo level at the break, and was busy after it, too.

Pegolo denied McKennie again from close range and Matthijs de Ligt struck the post before the rebound came off Leonardo Bonucci and went over. Pegolo stopped Álvaro Morata, then leaped like a grasshopper to deny Adrien Rabiot with less than 10 minutes remaining.

Nikola Milenković scored with the last kick of the game to shoot 10-man Fiorentina into the semifinals with a 3-2 win at last year’s runner-up Atalanta.

Milenković, who came on late as a substitute, scored in the third minute of injury time when the home team failed to clear a free kick. Milenković stopped the ball on his thigh and let fly with a volley inside the far post.

The visitors had an anxious wait as the goal was checked through VAR for any possible infringements before referee Michael Fabbri gave the all-clear and ended what had been a hard-fought game.

Fiorentina defender Martinez Quarta was sent off with his second yellow card in the 79th, shortly before Vincenzo Italiano reacted by bringing on Milenković – a defender – to help see out the draw and force extra time. But the Serbian scored the winner instead.