Jota scores twice to give Liverpool 2-0 win over Leicester 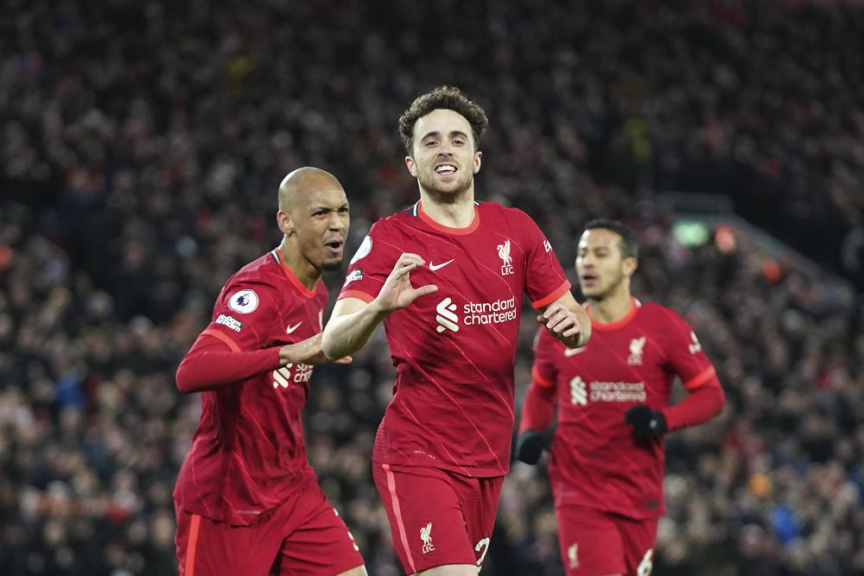 LIVERPOOL, England (AP) — Liverpool forward Diogo Jota scored twice to reach the 100-goal mark for his club career and give Liverpool a 2-0 win over Leicester in the Premier League.

Jota has now scored in 18 different Premier League games for Liverpool, of which it has won 15 and drawn three, and he is proving an integral part of the club’s challenge on four fronts.

His first on Thursday took him into three figures for his career, the second late on was his eighth against Leicester.

Mohamed Salah made his return after losing the African Cup of Nations final with Egypt and came off the bench to a loud ovation.

By then the home side had been leading for 24 minutes courtesy of Jota’s close-range strike after Foxes goalkeeper Kasper Schmeichel could only parry Virgil Van Dijk’s header.

The Portugal international has more than played his part over the last couple of months, scoring 12 in last 16 appearances, and his Premier League tally of 12 this season is only four behind Salah.

But Salah could have had a hat trick within 20 minutes of coming on had he not been denied by two good Schmeichel saves and the angle of crossbar and post.

January signing Luis Diaz took Salah’s place in the starting line-up for his full debut and produced an encouraging display but was also denied his first goal for the club by Schmeichel.

The win keeps second-place Liverpool nine points behind leader Manchester City, with one game in hand.